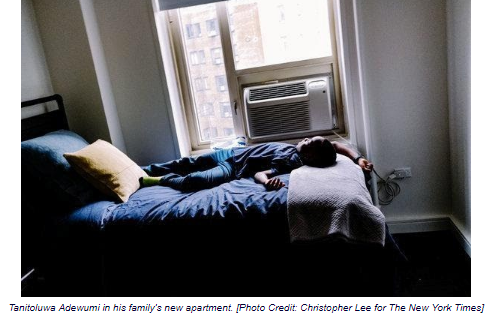 The eight-year-old Nigerian chess champion, Tanitoluwa Adewunmi, and his family have moved into a new apartment, courtesy of goodwill donations after his success story went viral.

According to the New York Times, Tani, who recently won the New York State Chess championship for his age bracket, got a GoFundMe drive which raised more than 200,000 dollars for him, his parents and brother.

“The family settled on one of the more modest and practical housing offers:

An anonymous donor paid a year’s rent on a two-bedroom apartment near Tani’s current school. The apartment is clean, comfortable and freshly painted, without being luxurious, and the Adewumi’s gaze adoringly at their new kitchen.

“I want my mom’s cooking again!” Tani mused as he explored the apartment. It was bare, but another donor had offered furniture, sheets and towels. “Someone else was sending 100 chess books.”

It added that three film companies are vying to make movies about Tani.

The young chess champion, whose family are taking asylum in a homeless shelter in Manhattan after they fled the Boko Haram insurgency, won seven chess trophies, including the state tournament, where he outwitted other children.

His feat has attracted commendations from parents and celebrities, with the story getting the attention of former US president Bill Clinton, who invited the lad and his parents to his office.