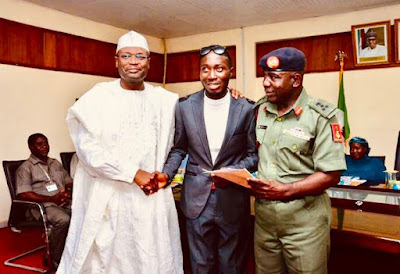 Mr Daniel Oluwatobi who lost his sight while serving in the NYSC is now gainfully employed after being given automatic employment by INEC. He served as an INEC ad-hoc staff during his NYSC days in Yobe state during the 2011 general elections, lost his sight n the process.
The INEC called him up in June 2016 and offered him automatic employment. In a recent post on Twitter INEC recalled the day Oluwatobi was offered employment in 2016. They wrote:
“#Memories
INEC Chair, Prof. Yakubu (L) presents a Letter of Appointment to ex-NYSC member, Mr Daniel Oluwatobi, who lost his sight while serving as INEC ad-hoc staff in Yobe during the 2011 general elections, at NYSC HQ, Abuja in June 2016. Brig Gen Sule Kazaure, the DG was there”