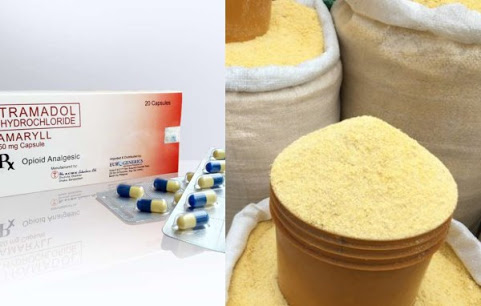 A yet-to-be identified Onitsha-based businessman has allegedly abandoned a substance suspected to be tramadol concealed in bags of garri.
The owner ran away on sighting officers of the agency.

The National Agency for Food and Drug Administration and Control said the substance was concealed in five bags of the staple.

The Director General, NAFDAC, Prof. Moji Adeyeye, stated this at the inauguration of the NAFDAC-Young Against Drug Abuse Awareness campaign and stakeholders’ meeting in Onitsha, Anambra State, on Wednesday.

Represented by the State Coordinator, NAFDAC, Mrs Christiana Esenwah, Adeyeye who spoke on the topic: ‘Abuse of psychoactive drugs in Nigeria: Our Problem’, expressed concern over the increasing rate of drug abuse among youths, especially in the North-West.

“It is estimated that 70 per cent of the boys in Kano are on drugs, while a lot of young girls and women of childbearing age abuse drugs in order to overcome frustration,” Adeyeye stated.