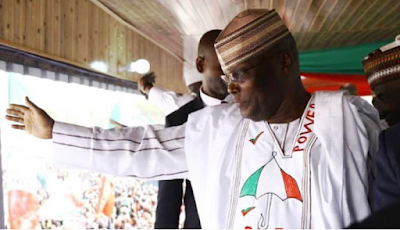 The presidential candidate of the Peoples Democratic Party, Alhaji Atiku Abubakar, said he is on a rescue mission to save the nation from further sinking under the watch of President Buhari and the APC.

Speaking in Damaturu, Yobe State, on Wednesday during the PDP presidential campaign, the former vice president berated the ruling party for dragging the nation backward since it was voted in 2015. He added that the APC is a failure.

The PDP presidential candidate, who was hailed by a mammoth crowd of party’s supporters, lamented that the APC had misgoverned the country by making promises which were not fulfilled.

He declared, “The PDP has come to rescue the people of the country from the suffering which the APC has put us into.”

Also speaking at the rally, the National Chairman of the PDP, Prince Uche Secondus, urged Nigerians to vote for the presidential candidate of the party, Alhaji Atiku Abubakar, in order to rescue the nation from hunger.

He said, “The nation is currently suffering from hunger and insecurity. There is a need for a competent and well experienced Nigerian to come on board to save us. As we are all aware, Nigeria is in distress and we are in dire need of a well-connected leader to rescue us.”

In his address, Engr Buba Galadima who is the Director General of Atiku Campaign Organisation, urged youths and women to vote President Muhammadu Buhari and the APC out of power in the general elections. 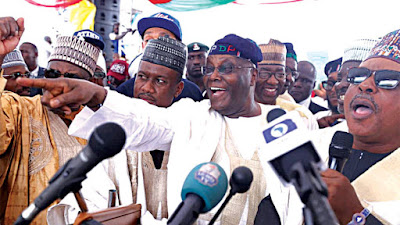 In Maiduguri, Borno State, Atiku warned security agencies and the Independent National Electoral Commission to shun partisanship during the presidential poll and face their duty with patriotic zeal.

He said the ruling APC government was planning, by recent posting of state commissioners of police, to rig the election but he warned that security agencies and INEC should not allow themselves to be used.

He promised that if he was elected, he would restore peace back to the Northeast and Nigeria in general.