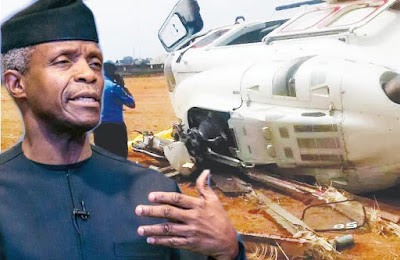 The nation was saved from tragedy on Saturday as the helicopter, Augusta AW139, conveying Vice-President Prof Yemi Osinbajo crash-landed in Kogi State.

The incident occurred in Kabba, where the VP had visited in continuation of his engagement of Nigerians on the ‘Next Level’ re-election plan of President Muhammadu Buhari.

The Presidency said the accident would be investigated in line with protocol.

Osinbajo’s Senior Special Assistant on Media and Publicity, Mr Laolu Akande, who spoke with The Punch, disclosed that an investigation would be immediately set in motion.

Responding to a specific question on whether the incident would be investigated, he said, “We will follow all the necessary due diligence; that will be certainly done. That is the protocol and it is the order of things to happen.”

Asked further to speak on the condition of Osinbajo and other occupants of the ill-fated chopper, Akande said, “He is completely safe. He is actually at a road stop here in Kabba and he is addressing a mammoth crowd. He is safe and everybody is fine. Everybody got out of the chopper safely after that incident.

“The VP has since gone on to address people on the way. This is his second stop in Kabba right now.”

An eyewitness told one of our correspondents that the helicopter managed to land at about 2.22pm at stadium in the town before its propeller suddenly pulled off.

Although the remote cause of the accident was not known as of the time of filing this report, it was learnt that the pilot of the helicopter might have found it difficult to land due to the dusty terrain of the stadium.

Immediately the incident happened, the Vice-President was said to have been immediately evacuated from the scene of the incident into a waiting vehicle and was thereafter driven in convoy with other political office holders to the palace of Obaro of Kabba on a courtesy call.

Akande also issued a formal statement confirming the accident and the safety of Osinbajo.

The statement reads in part, “Vice-President Yemi Osinbajo, SAN, arrived in Kabba, Kogi State today. His chopper had crash-landed after a landing incident, but everyone is safe.

“Prof Osinbajo is now in Kabba after the incident and continuing his engagements in the state, engaging the people on the ‘Next Level’ plan of the Buhari administration.” 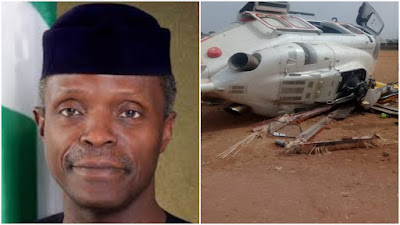 We’re grateful to God, says VP
Meanwhile, Osinbajo has expressed gratitude to God for saving him and the lives of all those aboard the chopper.

Speaking in Kabba, he said, “We are extremely grateful to the Lord for preserving our lives from the incident that just happened. Everyone is safe and no one is maimed. God has kept us safe and alive, delivered us from death so we can do more for our people and country.”