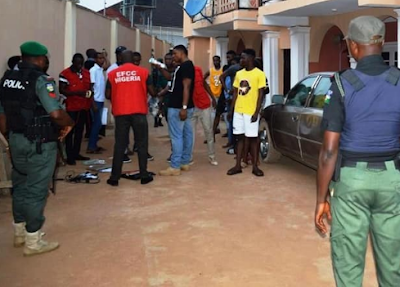 Operatives of the Economic and Financial Crimes Commission (EFCC) at the Ibadan Zonal Office have arrested six ‘Yahoo boys’ and recovered five different models of exotic cars and laptops.

The Acting Head, Media and Publicity of the commission, Mr Tony Orilade, who broke the news yesterday in Abuja Tuesday, said other items recovered from the suspects include mobile phones and documents containing false information.

He said: “The raid on apartments within the Kolapo Ishola Estate in Akobo area of Ibadan led to the arrest of the six young men between the ages of 24 and 30.

“Series of intelligence gathered on them suggested that they are deeply involved in all manners of fraudulent activities, including love scam, through which they illegally obtain money from unsuspecting victims. They will be charged to court as soon as investigations are completed.”