Nigerian-born British actor, John Boyega has ended his ambassadorial deal with London cosmetics brand, Jo Malone, after being cut out of an advert he conceived, directed and starred in for the Chinese market.

Boyega was replaced by Liu Haoran after the commercial was recast and reshot for the Chinese market. The original advert, London Gent, which was released last year featured Boyega walking around Peckham, south London, riding a horse, dancing with friends and hanging out with his family. The original cast was multicultural, while the Chinese remake featured no black cast members.

Reacting to the development which many have described as systemic racism, John Boyega disclosed that it was done without his consent. He added that it will be dealt with swiftly as he “doesn’t have time for nonsense.”

I have decided to step down as Jo Malone’s global ambassador. When I joined the brand as their first male global ambassador last year, I created the short film we used to launch the campaign. It won the Fragrance Foundation Virtual awards 2020 for Best Media Campaign.

Their decision to replace my campaign in China by using my concepts and substituting a local brand ambassador for me, without either my consent or prior notice, was wrong. The film celebrated my personal story– showcasing my hometown, including my friends and featuring my family.

While many brands understandably use a variety of global and local ambassadors , dismissively trading out one’s culture this way is not something I can condone.

It’s back to back but I assure you this will be dealt with swiftly. I don’t have time for nonsense. We press on and strong. Stay blessed people 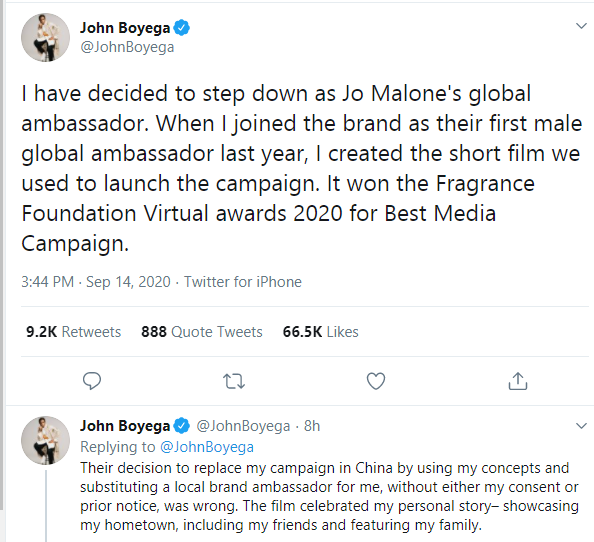 According to the Hollywood Reporter, Boyega was not made aware of the recasting of the ad and only found out about it on Twitter. Reacting to Boyega’s decision of severing ties on Twitter, Jo Malone tweeted;

John Boyega is an incredible talent, artist and person and we were proud to have him as part of our Jo Malone London family. We respect John’s decision and we wish him all the best.

It is not the first time Boyega has been erased from Chinese marketing materials. In 2015, Chinese posters for Star Wars: The Force Awakens sparked controversy after fans spotted that Boyega’s character Finn had been significantly reduced in size from the original poster.

Earlier this month, the actor spoke out about the systemic racism he experienced during his time in Star Wars. He told GQ;

“What I would say to Disney is do not bring out a black character, market them to be much more important in the franchise than they are and then have them pushed to the side.

“I’m the only cast member who had their own unique experience of that franchise based on their race … it makes you angry with a process like that,” he added, referencing the racist Twitter campaign to boycott the franchise based on his casting

US vs Iran: Afghanistan reacts to death of citizens in Tehran plane crash

Author Beta Gist Naija StaffPosted on January 8, 2020
Afghanistan has reacted to the death of 176 people after Ukrainian Boeing-737 crashed near an airport in the capital, Tehran, on Wednesday. The crash happened at...
Read More

Author Beta Gist Naija StaffPosted on November 30, 2019
Women groups have re-stated their call for justice for the death of the Peoples Democratic Party (PDP) Woman Leader, Mrs Salome Abuh, who was...
Read More