Nigerian rapper Falz has taken a swipe at former senator representing Kogi West Senatorial District, Dino Melaye after he shared a tweet in support of the #EndSARS protest.

The former lawmaker had in his tweet stated that the government has no power to ban protest and also advised them to work with the people.

Government have no power in our extant laws to ban protest. So Government must realise that the people have woken up from their slumber. Work with the people or welcome a REVOLUTION. SDM

However reacting to this, Falz told him to stop pretending he’s on the side of the protesters as they will also be coming for them.
He tweeted in response;

Oga no dey form like say you dey with us! We go soon face una matter #ENDSARS 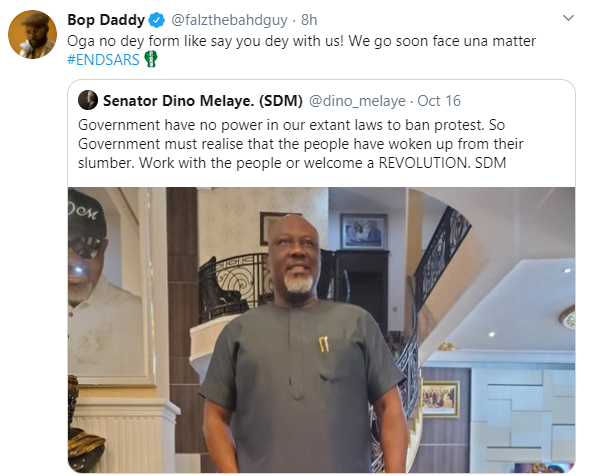 #EndSARS: "My mother went to the station to report that her son was missing not knowing he has been buried"- Lady recounts how her brother was allegedly killed by the police

Author Beta Gist Naija StaffPosted on May 19, 2019
The police in Ogun have arrested a 52-year-old man, Tayo Ogunmola, for allegedly attempting to dupe the police commissioner in the state, Bashir Makama....
Read More

DJ Cuppy Congratulates Her Father On His Sale Of His Company, Ask What He Will Do Next