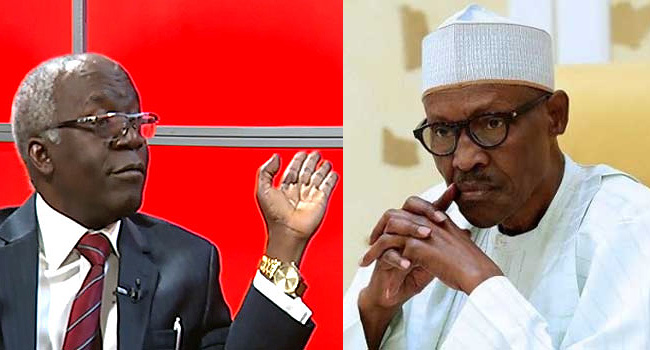 Falana to Buhari: Honor N’assembly summons and don’t embarrass yourself

A senior advocate of Nigeria (SAN) and activist, Femi Falana has asked President Muhammadu Buhari to honour the invitation of the national assembly.

Recall that the house of representatives had passed a resolution summoning the president over the rising insecurity in the country.

The lawmakers expected the president to appear before house on Thursday.

But attorney-general of the federation (AGF), Abubakar Malami on Wednesday argued that the national assembly has no constitutional powers to summon the president.

Reacting to the development, popular lawyer and activist, Femi Falana countered the argument of the attorney-general of the federation, saying the president should not allow himself to be embarrassed by turning down the invitation.

Falana added that the national assembly has the power to summon him.

“On his own part, the honourable attorney-general of the federation has questioned the constitutional power of the national assembly to invite the President on the grounds that as the Commander-in-Chief of the armed forces he cannot be compelled to disclose operational details of the defence of the country,” he said.

“With respect, the president is under a moral and legal obligation to honour the invitation.

“Having accepted the invitation the president should not allow himself to be embarrassed by turning round to turn down the invitation.

“By the combined effect of sections 88 and 89 of the Constitution the National Assembly is empowered to summon any public officer including the President in the course of conducting investigation into any matter with respect to which it has power to make laws and the conduct of affairs of any person, authority, ministry or government department charged, or intended to be charged, with the duty of or responsibility for executing or administering laws enacted by the national assembly.

“It is pertinent to note that the powers conferred on the national assembly under the provisions of this section are exercisable only for the purpose of enabling it to make laws with respect to any matter within its legislative competence and to correct any defects in existing laws; and expose corruption, inefficiency or waste in the execution or administration of funds appropriated by it.”

"Don't send me to my early grave. The pressure is unbearable" Eniola Badmus tells those who criticize her for her weight

Author Beta lensPosted on March 25, 2021
I love her heart not her looks – Man says as he shares loved-up photos with his chubby girlfriend
Read More

Author Beta Gist Naija StaffPosted on November 28, 2019
The House of Representatives has ordered its Committee on Power to probe operational and financial activities of the Niger-Delta Power Holding Company (NDPHC). The...
Read More

Author betalensPosted on July 18, 2019
Toke Makinwa in her new vlog session, spoke up against the stereotype of women doing all they can to please their prospective spouse’s mother...
Read More