The Katsina State Government says it has not banned the use of WhatsApp and other social media platforms by staff of secondary schools in the state.

Recall that a widely circulated memo had informed principals to direct the closure of school WhatsApp groups. 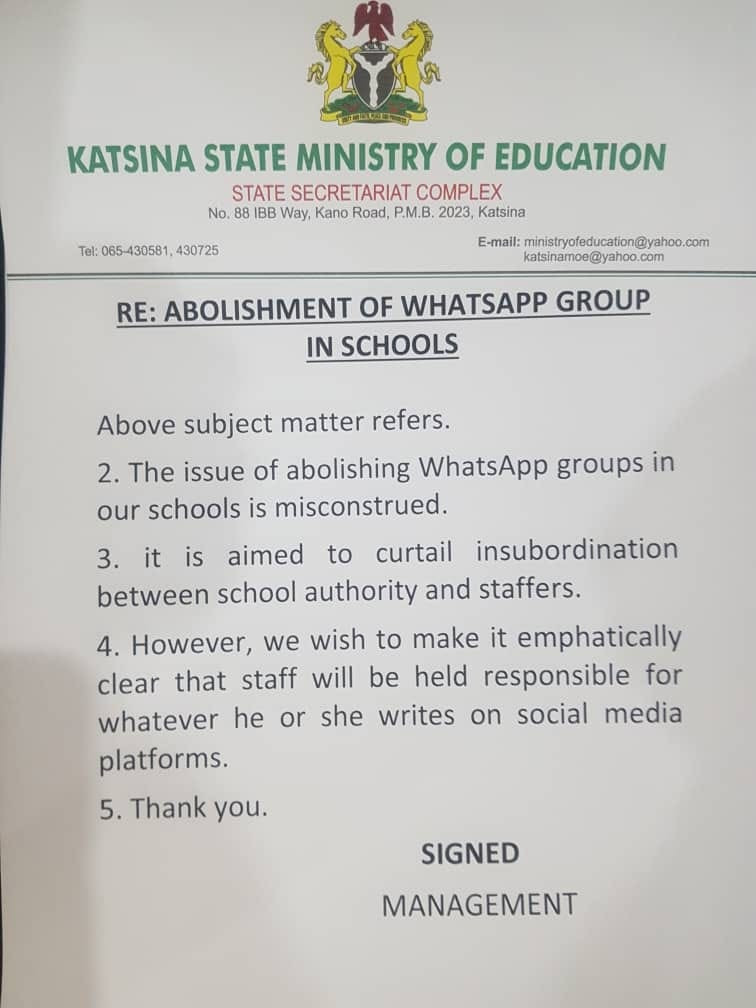 However, a statement issued on Wednesday, December 9, by the office of the Senior Special Assistant to the Governor on New Media said the memo was in respect of a particular zone of the Ministry of Education.

“The attention of the state government has been drawn to a widely circulated memo, especially on the Social Media, banning the use of WhatsApp groups by staff of secondary schools,” the statement reads.

“The memo in reference was in respect of a particular zone of the Ministry of Education and was aimed at addressing some administrative infringements.

“However, the state ministry of education has issued a clarification on the said memo in circulation.

“On its part, the state government under the able leadership of Governor Aminu Bello Masari has, at no time, bans or restricts the use of any Social Media platform by anybody or group as that will amount to trampling on the fundamental rights of the people.” the statement added.

In the clarification, the State Ministry of Education said the abolishment of WhatsApp groups in that particular zone is miscontrued.

“It is aimed to curtail insurbodination between school authority and staffers. However, we wish to make it emphatically clear that staff will be held responsible for whatever he or she writes on social media platforms.” the letter reads.

"Don't send me to my early grave. The pressure is unbearable" Eniola Badmus tells those who criticize her for her weight

No evidence yet that mysterious deaths in Kano was caused by Coronavirus — Minister of Health, Osagie Ehanire

Author Beta lensPosted on May 6, 2020
No evidence yet that mysterious deaths in Kano was caused by Coronavirus — Minister of Health, Osagie Ehanire
Read More

Tap from my grace and stop hating” – Veteran Nigerian singer, African China says as he shows off his new mansion

Author Beta Gist Naija StaffPosted on September 26, 2019
The Nigerian Army has said that it set to commence its special routine training exercises across the six geopolitical zones of the country codenamed...
Read More

Author Beta Gist Naija StaffPosted on September 25, 2019
The U.S. Chamber of Commerce announced that Benedict Peters, Chairman and CEO of AITEO, will serve on the Board of Advisors for the U.S.-Africa...
Read More