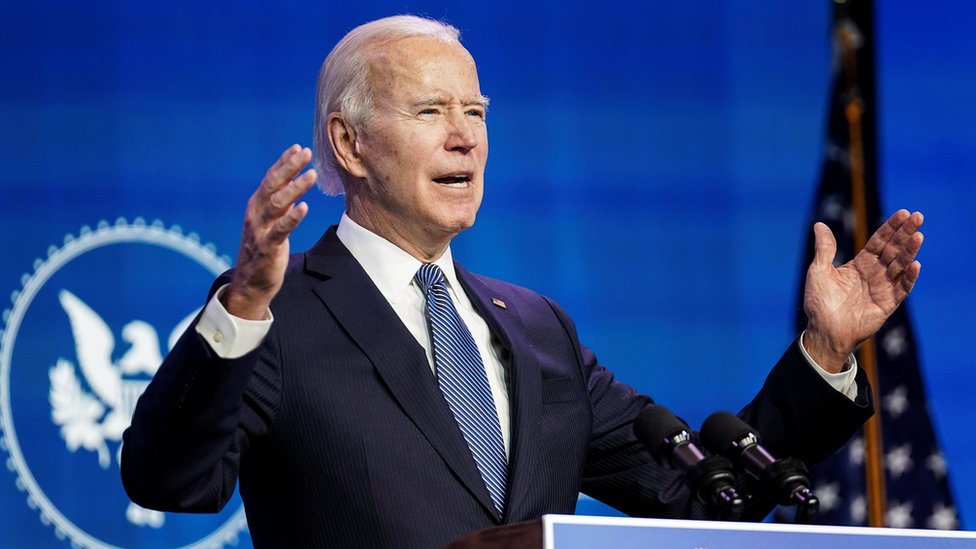 United States’ President-elect Joe Biden has unveiled a $1.9tn (£1.4tn) Coronavirus stimulus package for the US economy before he takes office next week.

If passed by Congress, it would include $1tn for households, with direct payments of $1,400 to all Americans and also includes $415bn to fight the virus and $440bn for small businesses.

Biden has promised to beat the pandemic that has killed more than 385,000 people in the US.

In a primetime speech on Thursday night from his hometown of Wilmington, Delaware, he said: “A crisis of deep human suffering is in plain sight and there’s no time to waste.”

The incoming president said: “There will be stumbles, but I will always be honest with you about both the progress we’re making and what setbacks we meet.”

The package includes $20bn for vaccinating Americans, including setting up mass vaccination hubs and dispatching mobile units to remote areas.

Two effective vaccines were delivered under the Trump administration, but health officials say the rollout needs to speed up.

“The vaccine rollout in the United States has been a dismal failure thus far,” said Biden. His administration aims to deliver 100m jabs in 100 days.

The package also includes $50bn to expand testing and $130bn to help most schools reopen by the spring.

The plan would fund the hiring of 100,000 public health workers for contact tracing.

The supplemental jobless benefits would also increase to $400 a week from $300 a week now and extended until September, along with a moratorium on evictions and home repossessions.

The proposal for $1,400 direct payments to Americans would come on top of $600 payments provided in a relief bill enacted last month bringing payouts for families to the $2,000 figure that both Biden and the outgoing Donald Trump called for.

The president-elect will also call on Congress to double the federal minimum wage to $15 an hour .

Didier Drogba separates from wife after 20 years together

Author Beta Gist Naija StaffPosted on October 5, 2019
Eden Hazard netted his first goal for Real Madrid, as they beat Granada 4-2 at the Bernabeu on Saturday, to remain top of LaLiga....
Read More

Author Beta Gist Naija StaffPosted on December 9, 2019
Iranian Foreign Ministry spokesman, Abbas Mousavi, has said the country is in talks with President Muhammadu Buhari government over the case of the leader...
Read More