Nigerian writer, Vincent Desmond has recalled when his mother attempted to get him arrested after he came out as gay to her.

Desmond, who writes for Reuters, British Vogue, among other publications, made the revelation in a tweet on Saturday, January 2.

“Every now and then I remeber that when I came out as gay to my mum she tried to get me arrested.” he wrote. 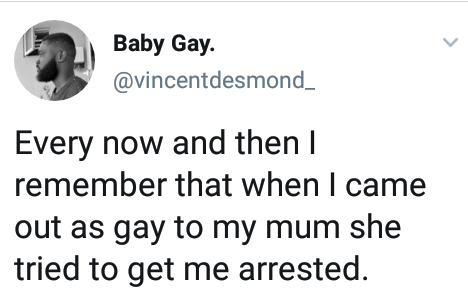 Author Beta lensPosted on August 27, 2020
Happy Beta Lens shares cute photos and videos of Herself dancing in the middle of the sea while on vacation
Read More

Why I Stopped Going To Church – Ghanaian Actress, Xandy Kame

Author Beta Gist Naija StaffPosted on November 20, 2019
Xandy also stated that she prefers to stay at home than go to a place where she will just be criticized. Xandy Kamel Controversial...
Read More

Neymar Goofs Around With His Dad While Showing Off Their Football Skills.

Author betalensPosted on April 8, 2019
Neymar’s return to match action appears to be edging closer as he looked fit and healthy in a keepy-up challenge at home against...
Read More