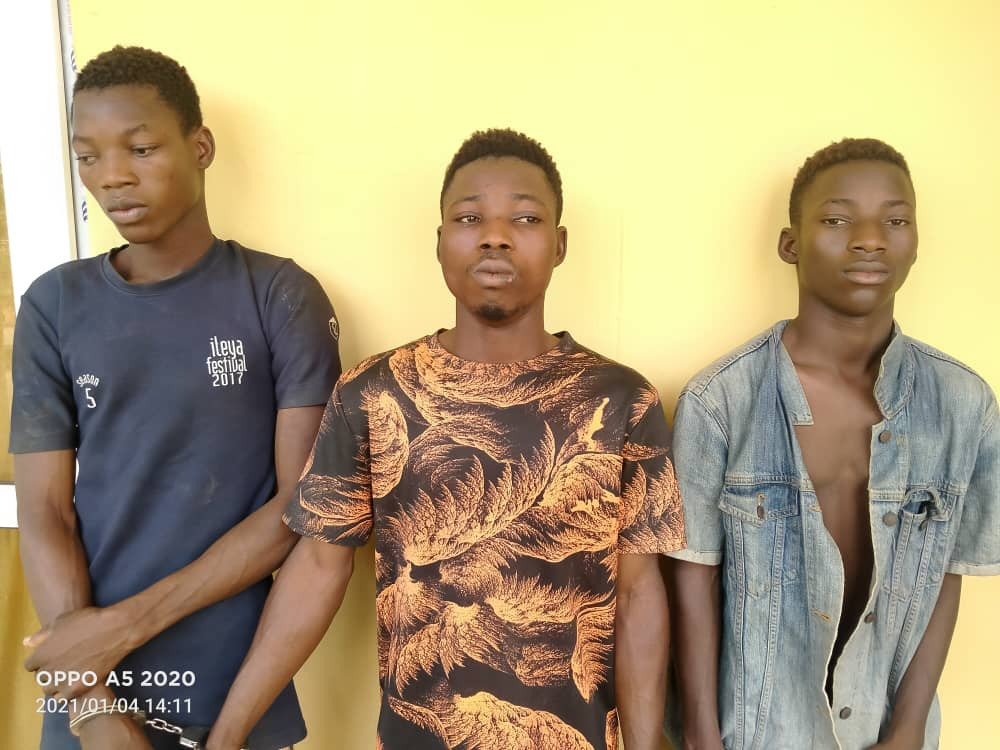 Men of Ogun Police Command have arrested three brothers identified as Okiki Mulero (23), Micheal Mulero (21), and Joseph Mulero (17) for beating a So-Safe corps officer who was on guard duty at OGD Estate Asero to death on the eve of Christmas.

A statement released by the spokesperson of the state police command, DSP Abimbola Oyeyemi, states that trouble started when one of the suspects Okiki Mulero, who is a commercial cyclist was denied entrance into the estate for carrying more than one passenger contrary to the rule of the estate.

Oyeyemi said this infuriated him and he called his two brothers, Micheal and Joseph Mulero who came to the scene and they jointly attacked the two security guards with planks.

“In the process, one of the security men by the name Segun Godfrey Barde was hit with a plank and he slumped.

“He was subsequently rushed to O&A hospital where he gave up the ghost on Friday 25th of December 2020 while receiving treatment”, Oyeyemi said

The police spokesperson said the case was reported at Obantoko divisional headquarters by the CDA executives of the estate, consequent upon which the DPO, CSP Sunday Opebiyi detailed his detectives to go after the suspects, and they were subsequently apprehended one after the other.

He said they all confessed to the commission of the crime.

He added that the state Commissioner of Police, CP Edward A. Ajogun has ordered the immediate transfers of the case to the homicide section of the State Criminal Investigation and Intelligence Department for further investigation and prosecution.

“The corpse of the victims has been deposited in the mortuary for post mortem examination”, Oyeyemi said

Pretty lady who is a cleaner proudly showcases her hustle (Photos)

US And Greek Citizens Among 9 Suspected Pirates Arrested In Nigeria

Author Beta Gist Naija StaffPosted on April 18, 2019
Nine suspected pirates comprising three Greece citizens, an American and five blacks have been arrested during a joint operation by the Nigerian Navy and...
Read More

Davido finally show us the face of his son (Photo)