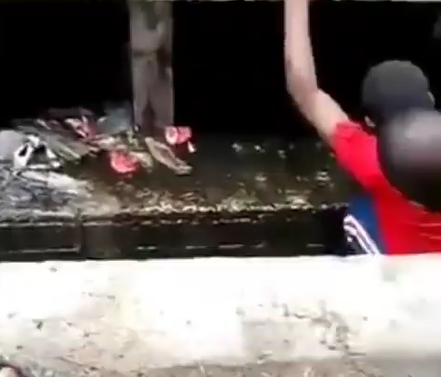 There was pandemonium in the Orile area of Lagos State today January 7 after residents discovered a tunnel allegedly used by kidnappers and ritualists to carry out their nefarious activities. The tunnel is under a bridge that links to Lagos Island.

Residents carried out a search in the tunnel and found several school pupils’ uniforms, a generator set, an air conditioner and other household items.

One of the suspected criminals that use the tunnel to carry out nefarious activities was allegedly apprehended and killed by a mob.

The Lagos state police command is yet to comment on this development.

Watch a viral video from the scene below

Author Beta Gist Naija StaffPosted on August 30, 2019
British Prime Minister Boris Johnson warned on Friday that any attempt by MPs next week to stop Brexit or delay it beyond October 31...
Read More

Author betalensPosted on July 19, 2019
Robbers  snatched a Venza car along Etete road yesterday in Benin city.Unknowing to them  the car had a tracker. The owner of the car...
Read More

Rita Dominic Slays As She Steps Out In Style