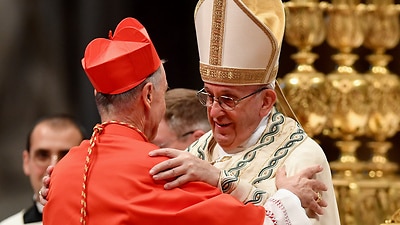 The Congregation for the Doctrine of the Faith, (CDF) issued a statement on March 15, warning that it is not licit to bless same-sex unions as marriages between men and women was a sacrament that cannot be extended to same sex couples.

“For this reason, it is not licit to impart a blessing on relationships, or partnerships, even stable, that involve sexual activity outside of marriage (i.e., outside the indissoluble union of a man and a woman open in itself to the transmission of life), as is the case of the unions between persons of the same sex,” it said.

“God does not and cannot bless sin: He blesses sinful man, so that he may recognize that he is part of his plan of love and allow himself to be changed by him,” the statement added

Approved by Pope Francis, the ruling of the doctrinal office was issued to address questions about whether Catholic clergy can bless same-sex unions.

The Pope in 2020 sparked controversies after he clamoured for the protection of civil rights of Homosexuals.

“Homosexual people have a right to be in a family, they are children of God and have a right to a family. Nobody should be thrown out or made miserable over it. What we have to create is a civil union law. That way they are legally covered,” Pope Francis said.

The office stated that its response was not to be a form of unjust discrimination, but a reminder of the truth of the liturgical rite.

It added that such blessings will not be allowed despite being motivated by sincere desire to help homosexual persons grow in the faith.

"You need to step up your game” — Bobrisky advises ladies, as he flaunts credit alert of N25M. (Screenshoots)

I’ve slept with 500 women from my church – Man confesses

Author Beta Gist Naija StaffPosted on September 19, 2019
Johannesburg – According to a survey conducted among expatriates Nigeria, South Africa, Kenya and Egypt are the most dangerous places in the world to...
Read More

Churchill writes emotional open letter to his son on his birthday, accuses Tonto Dikeh of keeping them apart.

Author Beta Gist Naija StaffPosted on November 2, 2019
Rivers State Governor, Nyesom Ezenwo Wike, has declared an Ikwerre youth with the nickname, ‘Italian’. He made the declaration while speaking during a solidarity...
Read More