On Monday, Tunechi took to Twitter to express his feelings on the annual event with a simple tweet “Fuk the Grammys.”

In December 2020, Lil Wayne questioned their lack of recognition after the Recording Academy failed to nominate his latest album, Funeral for the Grammy.

“As an artist, when I see da Grammys coming up & I’m not involved nor invited, I wonder, ‘Is it me, my musik or just another technicality?’ I look around w respect & wonder competitively am I not worthy?!” Weezy tweeted at the time. “Then, I look around & see 5 Grammys looking back at me & I go to the studio.” 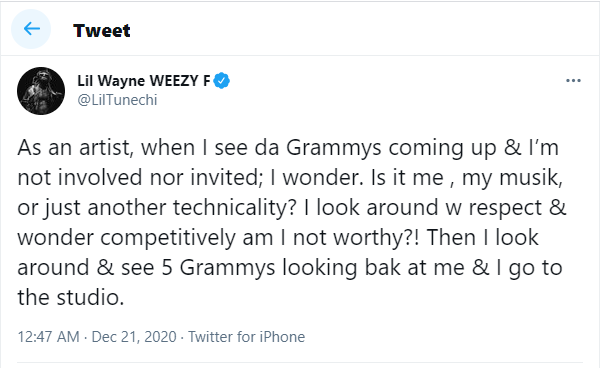 Author Beta lensPosted on May 3, 2021
Lady accuses Yomi Fabiyi of making sexual advances to her in exchange for movie role
Read More

Emmanuel Onwubiko: Little things can make a difference in Imo

Author Beta Gist Naija StaffPosted on October 21, 2019
As someone with a passion for travelling to Imo state from time to time from my base in the nation’s capital, I had one...
Read More

Author Beta Gist Naija StaffPosted on October 29, 2019
Twenty-seven suspected internet fraudsters have been arrested in one fell swoop as the operatives of the Economic and Financial Crimes Commission stormed Owerri, capital...
Read More