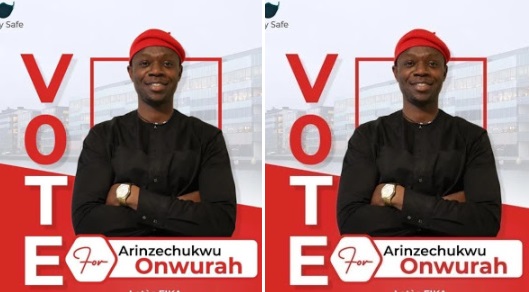 A Nigerian man identified as Arinzechukwu Onwurah has engraved his name in the history books after he won a Student Union election in Sweden.

He won the Student Union President election in Malmo University.

Arinze was the only African and Nigerian to contest the election.

The news was shared on social media with the caption;

“It’s a big one for the entire Nigerian students in Sweden as Arinzechukwu Onwurah emerges winner in the just concluded students union election in Malmo university Sweden. Chukwu as he is fondly called emerged winner after contesting with other students.

This is a good news to all Nigerian students in Sweden as people have started jubilating already.

Nigerian students are making us proud in diapora and this is just the beginning of more to come.

Chukwu whose slogan for his manifesto is FIKA which stands for F- fix what is needed, I- interact to enable understanding, K(C)-compromise(democracy)& A-action to serve. Fika is widely known in Sweden for tea. Congratulations Anrizechukwu.”

Future wife, I hope you are seeing this – Actor, Zubby Michael reacts to video of Mercy Johnson kneeling down to greet her husband

Davido shows off customized blanket with the face of Chioma’s son, Ifeanyi

Author Beta Gist Naija StaffPosted on August 17, 2019
The 2019 edition of the Big Brother Naija, BBNaija,’ Pepper Dem edition, on Friday night, witnessed another moment. This is as Frodd and Seyi...
Read More

Author Beta Gist Naija StaffPosted on February 4, 2020
A serving NYSC member identified as Tomiwa disclosed that he donated his entire N33,000 NYSC allowance to the less privileged children in his area...
Read More

My life is in danger over EFCC’s arrest of Naira Marley, Zlatan Ibile

Author Beta Gist Naija StaffPosted on May 14, 2019
Nigerian rapper, Ruggedman, has said he has been receiving threat messages after the Economic and Financial Crimes Commission (EFCC) announced that rising artistes, Naira...
Read More

Author betalensPosted on April 3, 2019
On Tuesday, the news of the nullification of Davido’s uncle; senator Adeleke was a trending topic on social media and the singer has reacted....
Read More