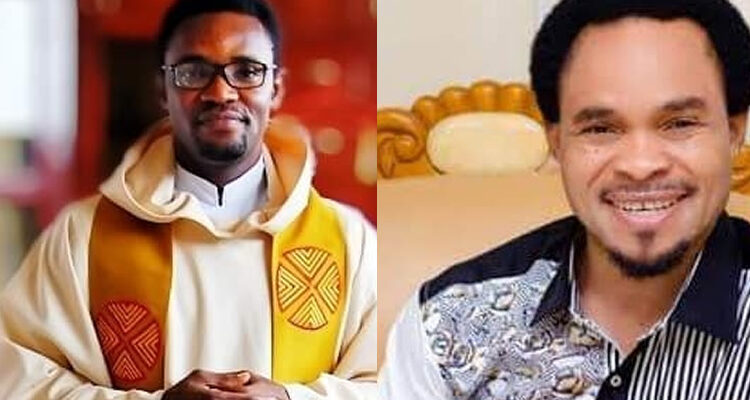 Catholic priest blasts Prophet Odumeje, says he’s not a Christian but a clown

Catholic priest, Fr. Kelvin Ugwu has said that Prophet Chukwuemeka Ohanemere popularly known as Odumeje, is not a Christian but a clown.

The Malawi-based priest stated this on Monday via his Facebook page, adding that Odumeje and all his antics has nothing to do with Christianity.

Fr. Kelvin Ugwu Facebook post reads: “Because we like to play to the gallery, because we are mostly never sincere to ourselves, and because we play too much, that is why you will see the words “Christian”, “pastor”, and “Odumeje” in one sentence,” Fr. Ugwu said.

“Some of you mistake “thou shall not judge” for “thou shall not say the truth.” This is why even a Catholic Church in the east had to invite Odumeje to one of their programs and he came and turned everything into a show.

“Well, for a truth, he entertains, that was why I once wrote about him as the new clown in town. But you see, the moment you call him a Christian pastor, you immediately insult everything Christianity stands for.”

Odumeje, the controversial Onitsha-based cleric is currently in the news after he vowed never to forgive comedienne Ada Jesus who accused him of conniving with actress Rita Edochie to stage fake miracles.

“If you see any guy you like, please toast him” – Actress, Lizzy Gold tells single ladies

Ogun State Police Command has arrested a 45-year-old man, Kolese Womiloju and his 25-year-old son, Taiwo Womiloju, over alleged killing of a Herdman, Abubakar Sidi Usman, at Gbagba Elewure village in Odeda Local Government Area of the state. The suspects were arrested following a complaint by the elder brother of the deceased, Usman Bello, at the Odeda Divisional Headquarters, that his brother was found missing. The Police, led by the DPO of the division, CSP Ajayi Williams led his men to the scene of the incident in Ogun found the body of the victim inside an abandoned well inside a bush.

Lagos nurse dies after being pushed down by one-chance operators

Author Beta Gist Naija StaffPosted on May 26, 2019
A Nursing Officer II at the National Orthopaedic Hospital Igbobi, Lagos state, has died, days after he was pushed down a moving vehicle by...
Read More

Author Beta Gist Naija StaffPosted on August 5, 2019
The Aare Onakakanfo of Yorubaland, Iba Gani Adams has appealed to the Federal Government to release the presidential candidate of the African Action Congress...
Read More