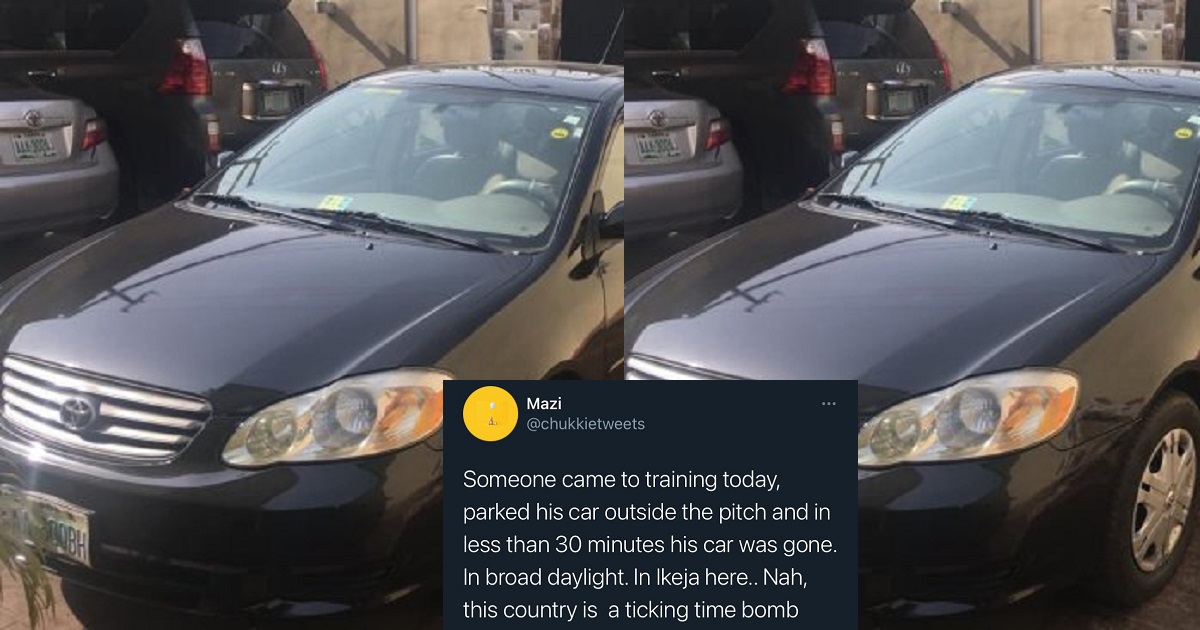 Some people’s cars have gotten stolen in a busy environment, some have lost theirs in a serene setting while others end up looking for their cars after a nice game of football.

A man has ended up being the victim of car theft after parking it to play football for some minutes in a neighbourhood in Ikeja, Lagos state.

According to a social media user @Chukkietweets who shared the story, the car owner parked it outside a football pitch and joined the players training for about 30 minutes.

However, before he could be done with the match, he discovered that his car had been stolen in broad daylight.

A photo of the car before it was stolen was shared online.

”Someone came to training today, parked his car outside the pitch and in less than 30 minutes his car was gone. In broad daylight. In Ikeja here.. Nah, this country is a ticking time bomb”

Many women are yet to get engaged because they refused to recognize when God’s chosen suitor showed up – Mike Bamiloye Nigerian clergyman and founder of Mount Zion Ministry, Pastor Mike Bamiloye, has made an insightful revelation as to why some ladies experience delay in getting engaged and better still getting married. Bamiloye took to his Instagram page and threw light on why many ladies are yet to get engaged, stating that some women delay in getting engaged due to God’s own plan but others have delays due to their own decisions in life. According to movie producer and director, the second group of ladies refused to discern God’s choice for them when they showed up. Reason for the season” Beautiful Song from my Super Talented motivational_uzo ft Mackson… http://btls.co/single.aspx?ref=2021/02/20/02/46/18/uzo-ft-mackson-reason-for-the-season-by-Uzo He wrote; ”Some Sisters’ Delay in Getting Engaged IS of God. But Many Sisters’ Delay Is There Own Faults. They Had Refused To Discern When God’s Choice Showed Up. They had Set For Themselves UnGodly and Carnal Standards God’s Choice Could not Meet.” See his post:

Househelp Sentenced To Death For Stabbing Bride-To-Be, Dayo Adeleke To Death In Lagos

Author Beta Gist Naija StaffPosted on May 21, 2019
Cameroonian househelp, Leudjoe Koyemen Joel, who stabbed his boss, Dayo Adeleke, to death at her home in Parkview estate in Lagos state on December...
Read More

Author Beta Gist Naija StaffPosted on September 21, 2019
Vice President Yemi Osinbajo has reiterated his conviction that Nigeria has great hopes towards development as  its success is key to Africa’s development. Osinbajo’s...
Read More

Author Beta Gist Naija StaffPosted on July 31, 2019
Super Eagles striker Henry Onyekuru is set for a third-successive loan spell away from his parent club, Everton, after the Nigeria international was denied...
Read More

Author betalensPosted on January 3, 2020
An eight months pregnant woman reportedly died in Kaduna state today January 2, after she was allegedly bitten by a snake. Her brother in-law,...
Read More