“Marriage over, party started” – Man defaces his car as he joyfully announces his divorce (photos)

A recently divorced man who seemed overly excited about the end of his marriage to his ex-wife, Felicia has defaced his car to make the announcement.

The man whose divorce was finalised on Monday, April 12th, defaced his car with several inscriptions to announce the end of his marriage.

Although the grounds for their divorce is unknown, the unnamed man appears very excited about his new relationship status and decided to paint his car with words that described how he feels about the divorce.

“#Bye_Felicia, Happily never after.” He added.

Close to one of the car tyres, he wrote, “Divorced” and added a smiling face drawing.

On another side of his car, he wrote, “Happy days on the way!!!” along with a drawing of a happy face

He added, “Whoever said money can’t buy happiness… never paid for a divorce before.”

“Proud wasband!!” he added close to the headlights, as he underlined the “Was” three times. 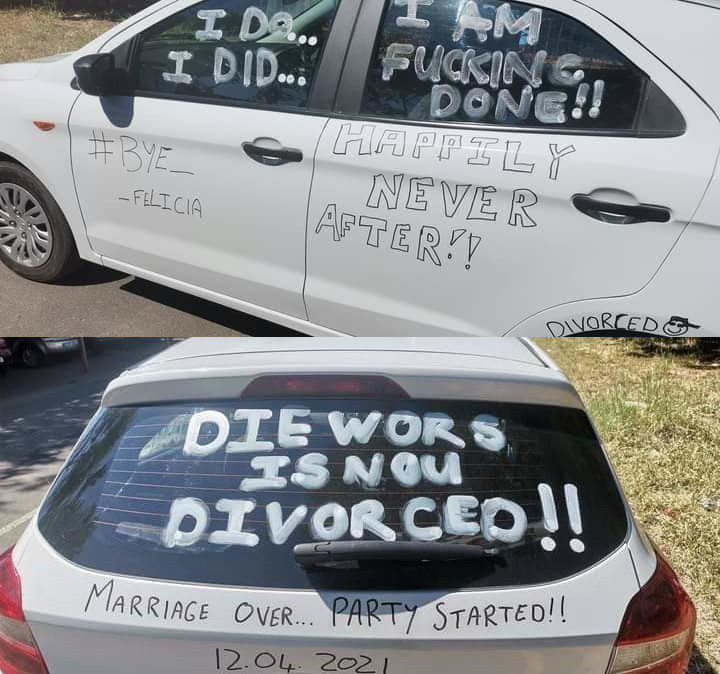 Author Beta lensPosted on October 27, 2020
CCTV shows woman push friend to her death after she bent down to tie shoelace
Read More

Kagara abduction – Some of these bandits are tired and need to be taken care of – Niger State Governor, Abubakar Bello (video)

Author Beta lensPosted on February 19, 2021
Kagara abduction – Some of these bandits are tired and need to be taken care of – Niger State Governor, Abubakar Bello (video)
Read More