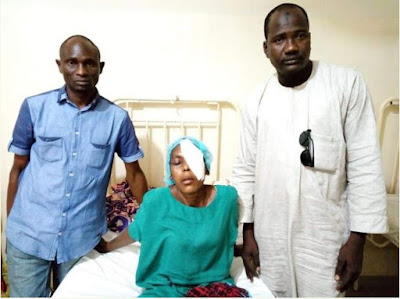 This is sad. Why should Nigeria still be dangerous in 2019 for one to perform their civic duty? The woman above has permanently lost her eye in an attack after the just concluded election in Kano state.

According to reports, she lost one of her eyes on Monday, 25/3/2019 after the results of Saturday, 23/3/2019 supplementary election in Kano were announced.

It was gathered that some political thugs loyal to an APC House of Assembly Member representing one of the constituencies in the State House of Assembly, attacked the woman at her house in Fagge LGA of Kano State, because of her political affiliation with Senator Rabiu Musa kwankwaso.