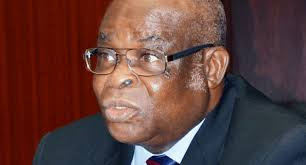 The Coalition of United Political Parties (CUPP) alleged on Tuesday that it had uncovered a plot by the federal government to force the suspended Chief Justice of Nigeria (CJN), Justice Walter Onnoghen, to resign “at gunpoint.”

The Spokesperson of the coalition, Imo Ugochinyere, in a statement, said the decision was taken after Onnoghen turned down all mouth-watering offers made to him.

Ugochinyere also alleged that Vice President Osinbajo and DSS were threatening the legal team of the embattled CJN to withdraw from the case.

“The CUPP has uncovered yet another dastardly plot by the federal government in their continued victimisation of the Chief Justice of Nigeria, Justice Walter Onnoghen. This time around, the Presidency has concluded the plot to force the CJN to resign at gun point after all mouth watering offers was turned down by the courageous Justice
Onnoghen.”

“The federal government has resolved on the dual action that the Vice President Yemi Osinbajo would weigh in and coerce his colleague Senior Advocates to withdraw from defending the CJN and to resort to the use of security agencies to intimidate the legal team of the CJN.

“Some of the Senior Advocates on the team of the CJN have been trailed, their offices and homes being circled and monitored, their telephones bugged and most of them have had reports from their bankers that their account statements have been obtained by the security agencies and certain instructions placed on some types of transactions.”

He further said that workers in the farm of the CJN located in Uke in Nasarawa State have been threatened to leave their place of work in the farm or pay with their lives by persons who disguised to be Fulani herdsmen.

He said, “We have credible intelligence that the visitors to the farm were arranged by government all to ensure the farm is crumbled and every other source of income of the CJN is blocked. The legal team of the CJN has written to the appropriate security agencies complaining of the warning and threats by the so called Fulani herdsmen.”

Ugochinyere lamented that Presidency is clearly playing hide and seek with the security of the country, adding that the government has been encouraging and motivating the spread of fake news against the CJN.