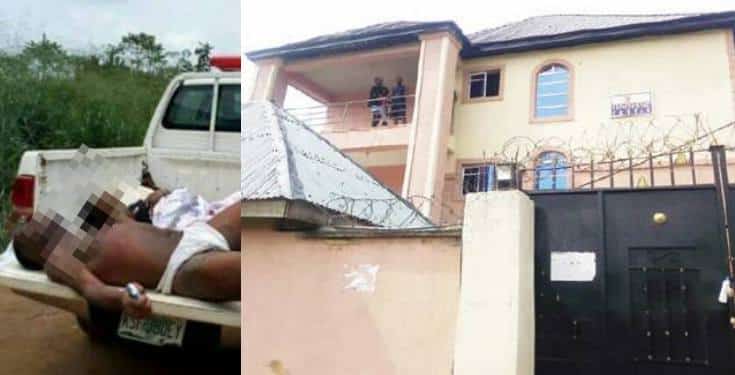 The only female victim among the four students who engaged in drunken, Tramadol-fueled group s*x, has died, Punch Metro reports.

It had been reported that the indiscriminate s*xual activity took place at the Sunshine Castle Hostel, Ihiagwa, Owerri, Imo State, involving the lady identified as Onyinyechi Okafor, and three other male students of the Federal University of Technology, Owerri.

Her male accomplices, who all died before her, were Ugochukwu Kingsley, Richard and Aka Uche.

Onyinyechi Okafor was identified as a student at the Federal Polytechnic, Nekede, Owerri, also in Imo State.

The victims had died after allegedly taking Tramadol tablets and Indian hemp before embarking on the group s*x.

Miss Okafor was buried on Thursday at her hometown in Ihiala, Anambra State, Punch gathered, even as some students disclosed that her course mates were forbidden from attending the funeral.

An undergraduate at Miss Okafor’s school said that the institution’s management barred her course mates from attending her burial.

The Rector of the institution, Michael Arimanwa, our correspondent learnt, threatened that any student of the school who attends the burial would be sanctioned.

He (rector) was said to have been irked by the shameful circumstance leading to the death of the female undergraduate.

The source said, “The female victim, Onyinyechi Okafor, has been buried. She was buried on Thursday in Ihiala, Anambra State.

“She was HND 1 student of Pharmaceutical Technology. The rector warned her course mates not to attend the burial or be associated with her funeral rites.

“You know that our rector is a priest. He was saddened by the shameful stories surrounding the death of the girl.

“The management warned that any student who attends the burial would be sanctioned.

“That was why every student stayed away from the burial.”

I Have Performed More Miracles Than Jesus Christ - Bishop Obinim

Author Beta Gist Naija StaffPosted on June 21, 2019
An American, Marco Ramirez, was on Thursday re-arraigned before the Lagos State Special Offences Court in Ikeja for allegedly defrauding some Nigerians of $565,000...
Read More

Author betalensPosted on September 15, 2019
Mr 2Kay has alleged that his ex-girlfriend Gifty Powers stays relevant by attacking him following their Instagram exchange days ago in which she backed an...
Read More