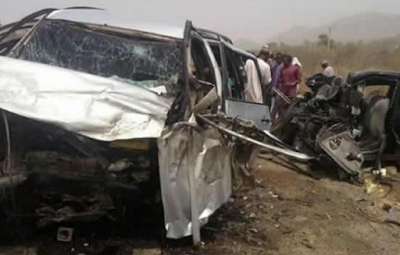 Thirteen people died on Sunday in a terrible accident around Bishi Village along the Bauchi-Gombe road. The accident happened in the afternoon when an 18-seater bus heading to Gombe had a head-on collision with another vehicle, a car.

Among the casualties were a couple, their two children and a younger sister to the man.

The deceased are said to be descendants of a historic family of a traditional title holder known as ‘Yarin Bauchi.’ A relation of the couple, Zainab Sabitu, said the deceased are Jamal Ahmed Yari, his wife Amina, their two children Adnan and Affan, and Jamal’s younger sister, Zahra’u Dogo.

She said they were returning to Bauchi from Gombe State when the incident occurred.

The Bauchi State Police Command on Sunday evening confirmed the accident. The Punch learnt that heir funeral prayer was held at the palace of the Emir of Bauchi, Rilwanu Suleiman Adamu, on Sunday, according to Islamic rites.

The death of five people in the family on the same day, our Correspondent learnt, has thrown the royal house and residents of the town into grief.

The Police Public Relations Officer, Bauchi State Command, Kamal Abubabakar, in a media statement made available to newsmen said that the accident happened on Sunday at about 2.30pm, when a bus loaded with 13 passengers collided with another vehicle.

Abubabakar, a Deputy Superintendent of Police said: “With a heavy heart, the Bauchi State Police Command regret to inform the general public that there was a fatal motor vehicles accident today, Sunday 31/03/2019 at about 14:30hrs along Bauchi-Gombe road involving two vehicles, a Sharon bus loaded with 13 passengers and a Toyota Camry loaded with six passengers.

“The victims were then immediately moved from the scene by security agents with assistance of good Samaritans to Abubakar Tafawa Balewa University Teaching Hospital for treatment.

“Unfortunately, on reaching the hospital, 13 passengers were confirmed dead by the medical doctor, while six are still on admission.”

The PPRO added, “Up till the time of this release, names and address of some of the victims are still unknown. The Command calls on the members of the public whose family member(s) traveled along that road and are still unable to reach them to check at the ATBU Teaching Hospital.”