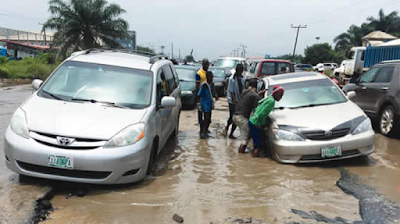 Businesses in Lagos State, the nation’s commercial capital, have been hard hit by the poor condition of roads in many parts of the state, leaving stakeholders such as the Lagos Chamber of Commerce and Industry worried.

Last week, a petrol tanker was reported to have fallen at a bad portion of

the Lagos-Badagry Expressway at Ojo Barracks Bus-Stop, leading to an explosion that killed two persons and destroyed six vehicles, including a truck conveying generators to the Alaba International Market.
Stakeholders, who spoke with The Punch in separate interviews on Tuesday, lamented that many roads had worsened in the state despite the high internal revenue generated by Lagos.

In May last year, the Lagos State Commissioner for Finance, Mr Akinyemi Ashade, said based on the first quarter results, the state achieved an average monthly Internally Generated Revenue of N34bn in 2018, compared to monthly averages of N22bn, N24bn and N30bn in 2015, 2016 and 2017, respectively.

It said Lagos accounted for approximately 35.86 per cent of the total IGR collected by states in 2017.

He said, “Lagos roads these days have become so deplorable that where you usually spend 30 minutes, you can spend one and a half hours now. That is a massive waste of time and human capacity.”

“The government needs to put more than usual attention to infrastructure. Some people are very reluctant to pay tax because they believe that the government is not doing anything that is worthy of paying taxes. We have a lot of abandoned road projects in Lagos and other states in the country.”

According to him, the Mainland, especially the interiors, has a lot of deplorable roads.

“Apart from the IGR, the state has got a lot of loans for roads and other infrastructures. Lagos needs to remember that it is already a metropolitan state and must set the pace for others,” Egbesola added.

The Director-General, LCCI, Mr Muda Yusuf, described road infrastructure as a major issue in the cost of operation of businesses.

He said, “This economy, whether it is at the state or national level, is dependent almost 90 per cent on roads for logistics – moving of persons and goods. So, to that extent, the shortcomings with our road infrastructure, whether they are bad, inadequate or have a capacity problem, affect the cost of operation.

“Transportation cost is a major component of the costs of many products in the country; and once your cost begins to go up, it affects your competitiveness, profit margin and capacity to sustain your business. It can affect your sales because if you want to transfer the cost to the consumers and your price is too high, the consumers will resist, depending sometimes on the kind of products that you are selling.”

According to Yusuf, many densely-populated areas in Lagos such as Badagry and Abule-Egba are contending with the issue of quality of roads.

He said, “It is tedious going to and coming out of those places. So, those areas require the government’s attention. Some of the roads are not maintained properly, while some have gone bad.

“I think the bigger issue with Lagos is not so much about the state of the road, but the capacity of the roads vis-à-vis the volume of vehicles, especially at peak period.”

An economist and Senior Lecturer, Lagos Business School, Dr Bongo Adi, said, “The major constraint to doing business in Lagos, apart from electricity, is logistics, which includes transportation and connectivity.”

He, however, noted that over the years, there had been some progress in terms of maintenance of roads in Lagos, with some roads currently undergoing repairs.

Adi said, “But we haven’t seen much in terms of expansion. It is not just the problem of bad roads; even if you fix all the roads in Lagos today, we will still be having a transportation issue.”

“In terms of IGR, Lagos ranks the highest in Nigeria. In terms of fiscal sustainability, I think it is only Lagos that can sustain itself; but that has not translated into adequate infrastructure generally.”

Adi stressed the need for political will to expand the road network and ensure standard roads in the state. 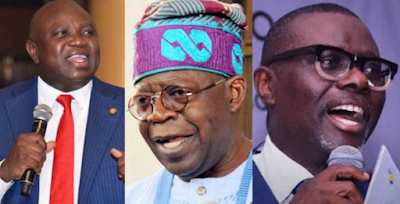 When contacted, the Commissioner for Works and Infrastructure, Mr Adebowale Akinsanya, told The Punch that the government had embarked on rehabilitation of the major and inner roads across the state.

“We just finished the first phase, and we are now embarking on the second phase. That is a comprehensive work ongoing,” he added.