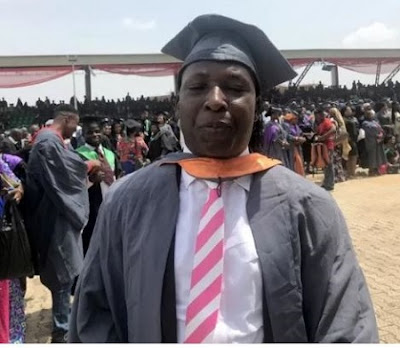 Many adult Nigerians without formal education would say age and family responsibilities discourage them from starting studying and any form of schooling. But Bala Magaji, 45, a father of seven who on Saturday graduated in Islamic Studies, has challenged that claim.

Married to two wives, Mr Magaji on Saturday emerged the best graduating student of the National Open University of Nigeria (NOUN) for the 2018/19 academic year.

Mr Magaji, who was showered with encomiums at the

8th convocation ceremony of the university in Abuja on Saturday, said a university degree is not cheap or easy but can open doors to great benefits.

”I feel very happy and excited today and I will recommend the school because it is one of the best in the country and it has rich materials,” Mr Magaji told Premium Times in a separate interview.

Asked how he combined his academics and marriage, he said ”I had to tell my wife to sacrifice every time she said she needed me and that is why I had to praise and thank her in my speech.

”I had the feeling that I will perform exceedingly well so I created time to study and I ensured I understood all I read. On the average, I read two to three hours daily and had lots of sleepless night,” he said.

Mr Magaji recorded a Cumulative Grade Point Average of 4.8. He advised the management of the university to start a postgraduate degree in courses they are yet to have the programme.

”I will like to teach Islamic studies later,” he said. Mr Magaji currently works at Unity Bank and he has a previous degree in Zoology from the University of Jos and a Masters degree in Banking and Finance from Bayero University, Kano.

In his welcome address, the vice chancellor of the institution, Abdalla Adamu, said 20,799 students graduated, the highest in the school’s history. Last year, 14,769 graduated from the university.

Speaking on the academic development of the school, Mr Adamu said all the programmes the university submitted to the National Universities Commission (NUC) were accredited.

”Of the 18 programs submitted, 15 had full accreditation, while only three had interim accreditation. Even then, one of them is being phased out,” he said.

”The three programmes that got interim accreditation are B.sc Hotel and Catering Management, B.sc Political Science and B.sc Chemistry,” he said. 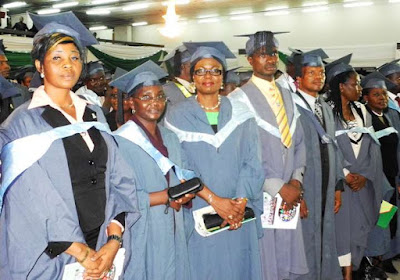 He said the institution received over 250 PhD applications between 2017 and January 2019, out of which 34 scaled the selective examinations and were granted admission.

Similarly, the pro-chancellor of the school, Peter Okebukola, said the management of the school is confident that the authorities of the Council of Legal Education and the National Youth Service Corps (NYSC) would discuss with NOUN on how to end the discrimination against NOUN graduates so that they can access the services offered by the agencies.

He urged all the graduates to concentrate on their life’s endeavour.