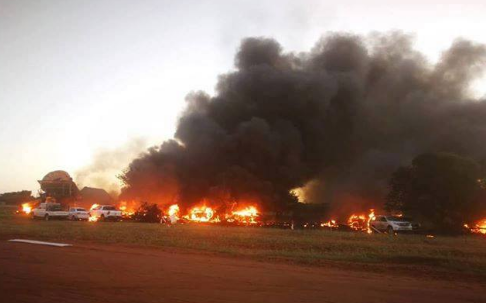 A pilot deliberately smashed a stolen plane into a club hosting a baby shower in a bid to kill his wife following a blazing row on Saturday, witnesses say. Charl Viljoen was filmed flying the aircraft dangerously low as he menaced guests at the party in Botswana, according to horrified onlookers.

He then ploughed the plane directly into the building, killing himself in a huge fireball and destroying the clubhouse. Unfortunately for him, no one else is believed to have been hurt as panicked party-goers managed to evacuate just moments earlier.

Witnesses had noticed the plane circling perilously close to the building at Matsieng aerodrome near Gaborone, the capital of Botswana, just after sunset and rushed to get out.

It’s believed that hours before the crash, Mr Viljoen, 38, had arrived uninvited to the party.

The South African then hit his wife Natasha during a blazing row, witnesses told local media.

A party-goer told The Citizen: “He had a fight with his wife there and he actually hit his wife, and everybody told him to f*** off because you don’t treat a woman like that.”

Viljoen is thought to have travelled 30 miles south to Sir Seretse Khama airport where he stole a twin-engined Beechcraft Super King Air B200 plane.

The dad-of-one then smashed the eight-seater aircraft into the clubhouse, which erupted in flames and destroyed 13 cars and an air traffic control tower.

A statement added: “It is rumoured that the pilot was involved in a domestic dispute earlier in the afternoon.

“At approximately 18.15 the aircraft approached Matsieng aerodrome from the direction of Sir Seretse Khama airport and made a number of low-level flypasts from different directions past the club facilities next to the air traffic control tower.

“Matsieng Flying Club members sensed that the pilot might have had an ulterior motive at the time and ordered an immediate evacuation of the club premises by the approximately 60 people present.”

It’s alleged that Viljoen called a friend from the cockpit of the stolen plane to check that his wife was still at the party. 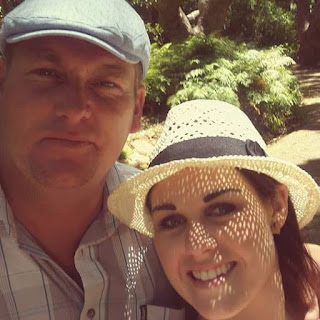 Just last week Viljoen, who worked for Kalahari Air Services, posted a picture of himself in his pilot’s uniform standing at the steps of a plane.

Dramatic footage of the aftermath of the crash shows flaming debris and plumes of thick black smoke – as well as a deflated children’s’ bouncy castle. Viljoen was taken to nearby Deborah Retief Memorial Hospital where he was pronounced dead.

The country’s civil aviation authority has said it will investigate.