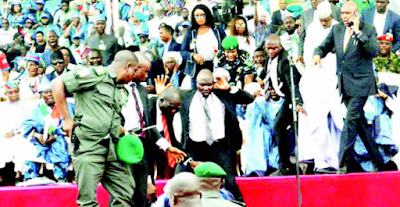 President Muhammadu Buhari on Monday at the Ogun State All Progressives Congress presidential rally in Abeokuta, narrowly escaped being stoned as suspected thugs pelted the National Chairman of the party, Adams Oshiomhole, with stones and water sachets.

The rally, which started immediately after President Buhari arrived at the MKO Abiola International Stadium, Kuto, Abeokuta venue of the event at about 3.00pm, was suspended for some minutes following the violence that broke out.

Violence erupted when Oshiomhole was invited to the podium for his speech. As he began to speak, suspected hoodlums started throwing stones at him and one of the stones flew in the direction of the President.

Tinubu leaves while Buhari was speaking
The development angered the leaders of the party, including Tinubu, who left the podium while the President was making his remarks.

Tinubu was so enraged that while he was leaving the podium, he flung the APC’s flag which was placed beside him and went to sit in his car parked in the President’s convoy.

While Tinubu was going into the car, he was followed by some suspected thugs who were shouting ‘ole’, ‘ole’,’ole ‘ole’ (thief, thief, thief ) after him.

Oshiomhole further aggravated the crisis when he mentioned Dapo Abiodun as the party’s governorship candidate in the state while addressing the crowd.

Upon hearing Abiodun’s name, the crowd started booing Oshiomhole while some threw objects including stones and water sachet at him, prompting security agents to guard him.

Amosun had lost out in his bid to secure the APC governorship ticket for his ally, Adekunle Akinlade.

The governor had accused Oshiomhole and some APC leaders of working against his interest through Abiodun’s emergence. He also vowed not to hand over to Abiodun.

Shortly after, Akinlade defected to the Allied Peoples Movement and Amosun backed his action.

He even took him to the presidential villa where they met with Buhari.

This, the Ogun APC, claimed was responsible for the violent rally as it alleged that Amosun was behind the crisis on Monday.

While speaking before he was attacked, Oshiomhole had said, “The primary purpose for today is to solicit support for our candidate, President Muhammadu Buhari, and to also present the APC flag to our governorship candidate in the state, Prince Dapo Abiodun.”

Shouts of ‘thief’ as Oshiomhole introduces Abiodun
As soon as Oshiomhole said this, shouts of “Ole! Ole! Ole!” (thief, thief, thief) rent the air as the suspected party thugs pelted him with stones.

The atmosphere became charged to the extent that Amosun had to mount the podium again to beg the hoodlums to stop the attacks on Oshiomhole and others.

Despite the breakdown of law and order at the rally, Oshiomhole hurriedly presented the party flag to Abiodun.

Earlier in his welcome address, Amosun had eulogised Buhari’s virtues and highlighted the reasons Ogun people should vote for him.

Amosun said, “ We have accepted President Muhammadu Buhari as our father. In the interest of love and the respect we have for Mr President, let us swallow our pride and subdue our anger. Don’t let them go back with an erroneous impression that we are not for Buhari.

“We are not just supporting Buhari because he is our father, but, because of his performance. Look at what he has done for the entire nation, he is someone with integrity. He said he would fix all our roads and infrastructure. He has done a lot for us. He has kept all his promises. They are looters and that is why they are against Buhari. This is about all of us”.

Amosun, however, attacked Afenifere, urging the President not to lose sleep over the group’s endorsement of the presidential candidate of the Peoples Democratic Party, Atiku Abubakar.

He said, “We have seen the wonderful work Buhari is doing is for all of us. Yoruba are not two in the country. We are the Afenifere.

“We are the people that will use our PVCs to defeat those that call themselves Afenifere.. Who else is Afenifere if we are not Afenifere ?. Tinubu, Akande, and other Yoruba leaders are here.

“They are not your friends, they are our enemies. We are going to fight them with our votes. We will show the true opinion poll on Saturday.”

The governor, however, provoked Oshiomhole and other party leaders when he urged his supporters to vote Buhari on February 16 while he stylishly supported Adekunle Akinlade of the Allied Peoples Movement.

He said, “The other one, we will resolve it on March 2nd. We are respecting President Muhammadu Buhari. Don’t transfer your anger to the APC.

“I have told you that you will all be one by March 3rd and you will come back to the APC. You know what to do when it is March 2nd, but honour me on February 16 and vote for Buhari.”

This, it was observed, provoked the APC leaders at the rally as a former governor of Osun State, Rauf Aregbesola, took the microphone and described Amosun as a hypocrite.

Aregbesola, who was not scheduled to speak at the rally considering the programme of event, spoke in Yoruba, saying, “We are not happy with the hypocrites among us. We are the APC, but, many people are hypocrites here. We must ensure that in February and March, we vote the APC.”

While the situation was tense, Osinbajo was called to make his remarks but he initially rejected the offer.

He was prevailed upon by Amosun to make his speech. In his speech, Osinbajo said he believed that the current administration deserved a second term.

He reiterated the President’s resolve to tackle corruption, affirming that it was possible to build a country free of corruption.

“Our country’s major problem is corruption. Our country is not short of money or ideas but it is short of men of character to use the resources judiciously,” he said.

Vote for candidates of your choice on March 2, Buhari tells Ogun residents
When it got to his turn, Buhari maintained a neutral stand by telling the people to “vote for him in the presidential election and vote for the candidate of their choice in the March 2 poll.

Buhari used the opportunity to highlight some of his feats, which he said, included improved economy, food security, winning the Boko Haram and recovering looted funds.

The President thereafter raised Abiodun’s hands. This angered Akinlade’s supporters and they started hurling stones at the President and other leaders of the party .

They shouted “No! No! No!” as the security agents attached to the President smuggled him into his car and zoomed off.

The party, in a statement by its spokesman, Tunde Oladunjoye, alleged that Amosun used thugs to cause violence at the APC rally.

It said that at some points, the thugs were personally led by Amosun, “who was seen on a video that has since gone viral, removing billboards and other campaign materials of Dapo Abiodun from the venue.”

The party said members of the caretaker committee were stopped from mounting the podium by Amosun’s thugs with obvious compromise of some security agents attached to the governor.

Ogun APC stated, “While tendering this apology, we are happy that the Department of State Services and other agencies have details of the sad events, which we urge them to submit to the Presidency.

Elegbede said the party was not happy over the incident, though he said the national leadership should be blamed for the protests.

He said, “The APC, Ogun State chapter, under the leadership of Chief Derin Adebiyi, will not like to reply anyone. What happened was between the APC supporters in the state. Some supporters are aggrieved by Abiodun’s emergence as the governorship candidate, while some like it.

“But our supporters are happy with President Muhammadu Buhari and are ready to vote for him in the forthcoming election.

“As you can see, all the APC supporters agree to vote for Buhari, What really happened could be traced to the emergence of Dapo Abiodun as the governorship candidate.” 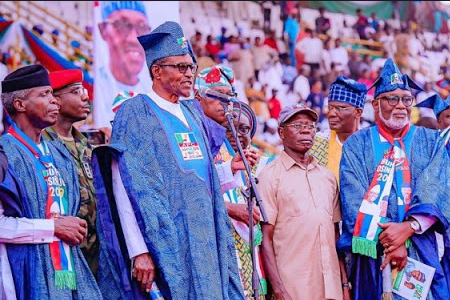 Violence, sign of rejection – PDP
However, the PDP on Monday said the assault on President Buhari, the Vice-President and the party chieftains was a direct message by Nigerians that they had rejected the party.