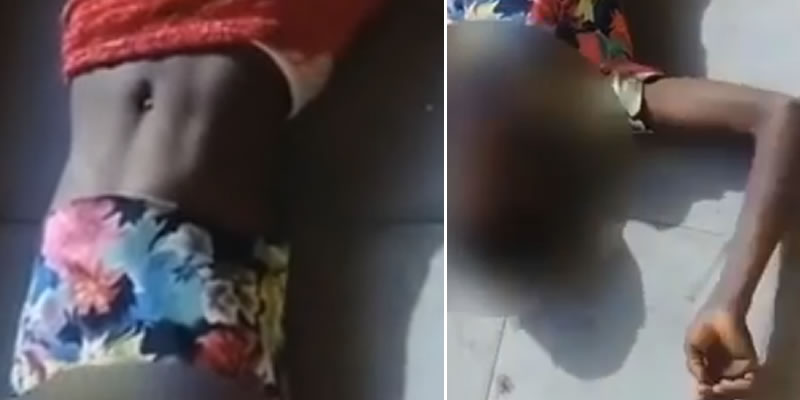 A young lady who was jilted by her boyfriend has tried to kill herself in Port Harcourt, Rivers state.

A heartbroken lady, identified as Onyechi, has been rescued after she tred to kill herself.

The young lady was prevented from throwing herself in front of speeding vehicles in PortHarcout, River State.

According to an eyewitness, Mercy, the lady was dumped by her boyfriend for another lady. Unable to stomach the breakup, Onyechi allegedly gulped a large quantity of dry gin.

She then proceed to the main road to throw herself in front of moving vehicles.

She was, however, rescued and dragged to the Ada George Police station, where her family members were contacted.

In similar news, a jilted lover, identified as Joy Osain who vowed to kill herself because of her cheating boyfriend has reportedly committed suicide on Boxing Day in Agbura community of Yenagoa, Bayelsa State.

Joy Osain had a dispute with her boyfriend, Augustus Eze after she caught him with another lady in his house, which made her allegedly vow to kill herself rather than sit back and watch another lady snatch her man from her.

And on Boxing Day in Bayelsa, the lady allegedly committed suicide. Joy fulfilled her threat by taking a poisonous substance that killed her. While her corpse has been recovered by the police and deposited at the Federal Medical Centre Yenagoa for autopsy, Eze’s house was destroyed by angry members of Joy’s family.

“I Was Misinterpreted On Operation Amotekun, I Did Not Say It’s Illegal” - Malami.

“I am the most stubborn she-male in my family” – Bobrisky reveals.

BBNaija 2019: Khafi in tears as she settles rift with Venita

Author Beta Gist Naija StaffPosted on August 14, 2019
Big Brother Naija 2019, BBNaija housemate, Khafi tried to hold back tears but could not, as she ended her rift with Venita over acting...
Read More

Author Beta Gist Naija StaffPosted on October 5, 2019
Following successful conclusion of the 9th Bi-National Commission of South Africa and Nigeria meeting in Pretoria, South Africa, which was elevated to the level...
Read More

Author Beta Gist Naija StaffPosted on September 20, 2019
A chieftain of the Peoples Democratic Party, PDP, Ondo State chapter, Toyin Akindele, who was involved in an auto crash is dead. Ajinde, who...
Read More