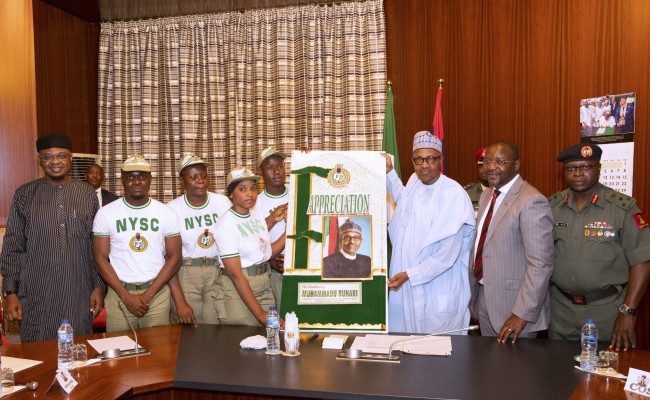 Four members of the National Youth Service Corps scheme, representing thousands of others, today, visited President Buhari to thank him over the recent increase in their monthly allowances from N19,800 to N33,000.

President Muhammadu Buhari has described the National Youth Service Corps (NYSC) scheme as a laudable one that needs to be sustained as it affords the opportunity for Nigerian youths to understand the country better.

“People come from far and wide; some from Victoria Island in Lagos have not even been to Ikeja. They now find themselves in Daura and other parts of the country. Whenever I go to my town, I get in touch with members; some of them from Lagos, some from Port Harcourt,” he stated.

President Buhari who said this Thursday in Abuja while playing host to corps members who came on a thank-you visit to him, also praised General Yakubu Gowon for the initiative.

“Whenever I meet General Gowon up till today, I thank him for initiating the NYSC. It is a nationalist and patriotic thinking that led to the development of the scheme,” he added

Four members representing others countrywide came to convey their “deepest gratitude” to the President over the recent increase in their monthly allowances from N19,800 to N33,000.

According to them, “the implementation in January, when we least expected it brought tears of joy to us as we had doubts of the promises earlier made.” 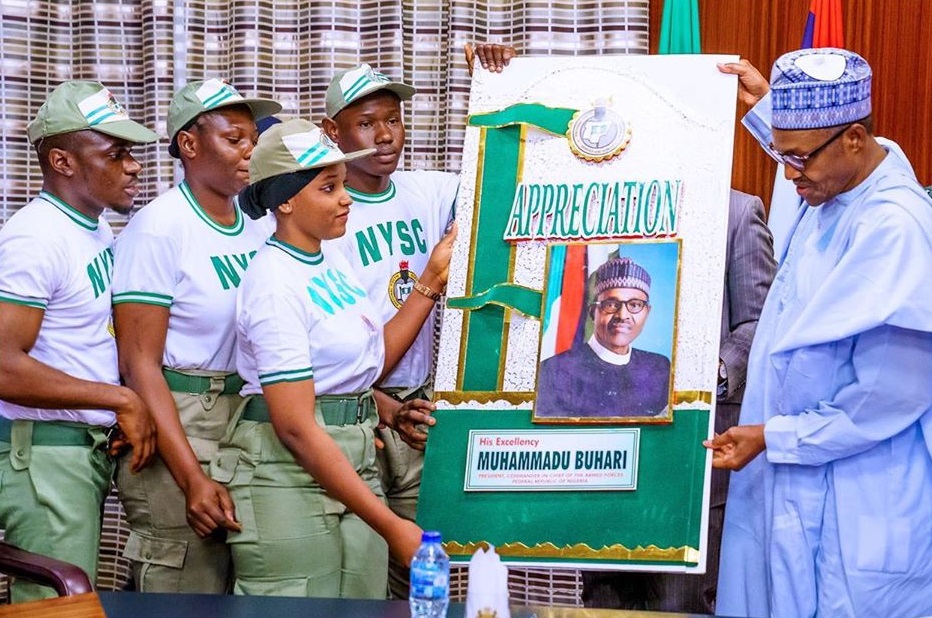 “You have demonstrated that you are a loving and caring father committed to the welfare of his children,” they added.

They also reiterated their commitment to do their best during their period in the scheme. “The increase is a wake-up call to us to show more commitment to the affairs of our fatherland. We are great stakeholders in our collective determination of building a prosperous and united Nigeria, the future belongs to us.”

The NYSC members were led to the State House by the Minister of Youth and Sports Development, Sunday Dare and the Director General of the scheme Brigadier General Ibrahim Shehu.

Man who killed a Nigerian in U.S for urinating on his Block sentenced to life in prison

Author Beta Gist Naija StaffPosted on November 24, 2019
The Speaker, Lagos State House of Assembly, Mr Mudashiru Obasa, has called for timely presentation of budget to the legislature by October of every...
Read More

Author Beta Gist Naija StaffPosted on August 25, 2019
Shocking images has emerged on social media with claims that Nigerian Navy has arrested an American criminal along with three Greek pirates and others...
Read More

Chacha Eke Faani dismisses claim her marriage crashed due to domestic violence; says she has been diagnosed Bipolar disorder (video)

Author Beta Gist Naija StaffPosted on October 4, 2019
Kefas was abducted by officers @policeng who were set on his trail by Governor El-Rufai in Rumuogba, Port Harcourt on 8 May 2019. During...
Read More