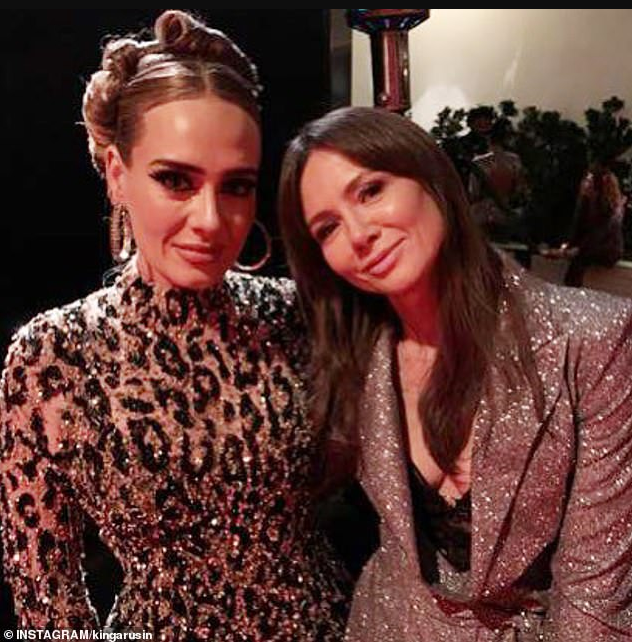 Adele put her slimmer curves on display in a sparkly leopard print dress as she partied with other stars at Jay Z and Beyoncé’s Oscars after-party on Sunday night.

The 31-year-old who recently lost so much weight looked beautiful in her glamorous ensemble as she posed with a journalist for an Instagram snap during the star-studded bash at Chateau Marmont in Los Angeles.

The journalist, Kinga Rusin shared the photo she took with Adele and wrote: “At yesterday’s private party, Beyonce and Jay talked to Adele about… shoes.”

She added that Adele is “as slim as a comma now.”

Kim, Khloe, and Kourtney Kardashian were also present at the private party, so was Charlize Theron, Diddy and his sons, Lana Del Ray, Jessica Alba, Jeff Bezos, Kanye West, Travis Scott and more. Kinga said one of the rules of the party was “no  photos” and this allowed people relax and have a good time.

Author Beta Gist Naija StaffPosted on November 10, 2019
The members of the U.S. women’s national soccer team who sued the U.S. Soccer Federation (USSF) in March over allegations of gender discrimination can...
Read More

Author betalensPosted on August 3, 2019
Somadina Adinma who was dragged into the Regina Daniels and Ned Nwoko marriage conversation when it was contracted, is finally opening up on his...
Read More

Author Beta Gist Naija StaffPosted on December 1, 2019
For a long time, Brazil’s health care system was seen as a model for fighting HIV. But the number of infections is rising again,...
Read More