An ATM card thief who got unfortunate after he stole an ATM card from an unsuspecting elderly woman has been caught in a hotel he lodged in with his girlfriend.

The suspect got quite unlucky after he stole an ATM card from an unsuspecting elderly citizen from whose account he withdrew over N500k while posing as a policeman.

He was caught after he made a transfer with the ATM card in a hotel he lodged in near his victim’s house.

Narrating how the suspect withdrew over N500K from her mother’s account, Vivian Emesaraonye wrote;

“My mum was duped of 500k last night. She went to the Atm, tried to put her pin, it wasnt working. She saw a young man standing behind her, and turned to him to complain or vent basically. Feigning concern, he asked to assist her try again. Being so trusting herself, she gave him the card. He put it, and told her the Atm card was stuck, and that she needed to go inside the bank and tell them. She went to the security man, since the bank was already closed and did just that. By the time she came out, the man already left. Oh, he told her he was a policeman.

Fast forward to 12 midnight, she got her first transfer alert 300k. Then 100k..until there was only 30k left in the account. She got dressed, then drove to town with my dad, and made a police report. But they couldn’t do much, since they were not sure the Atm terminal he made the transfer from.

At about 1am, he made another transfer. But this time through a POS machine. Eastgate Hotel. Less than 15 minutes walk from my house. He paid for the room, and ordered food as well. We called back the police men, told them of our findings and they met us at the hotel in less than 30 minutes.

They got into the hotel, checked the person who lodged in at the time the POS sent the alert. The print-out they had corresponded with my mum’s Atm card number. That was how we apprehended him with the girl he made the transfer of the first 300k to. She allegedly was meeting him for the first time yesterday, but they’ve been friends on Facebook for a while. We also recovered some Atm cards, which included my mum’s card , and the printout he used for the transactions.

Anyway, they are both cooling their heels in the holding cell and will be prosecuted to the full extent of the law.

I must commend the squad for their timely intervention. After today, my perception of the Nigerian police is a bit different..

Times are strange. Be aware!” 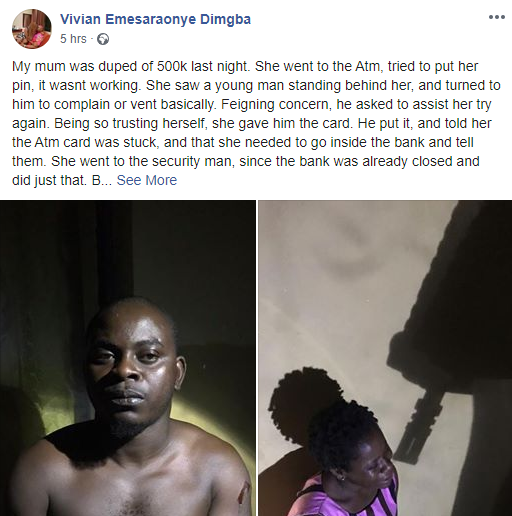 Upon being asked to release the ladu who the suspect made a transfer of N300k to, Vivian wrote in a rejoinder post;

The Atm cards. I blurred the cards as not to further expose the owners . The diamond access card is my mum’s. You can see the receipt he used for the last transaction. I still don’t know why he didn’t pay with cash, because he obviously had some of the money he withdrew from the Atm.

I guess it was greed. 7k was what gave him out. I feel no sympathy for him. My mum is a high blood pressure sufferer. Close your eyes for a minute and imagine her state now. The money isn’t hers either. It was transfered from dad’s business contact for a surveying work he was suposed to carry out for his client. I would’ve refunded 500k, for no just cause.

Those of you who feel like the girl is innocent, did you see where I used the word “allegedly?” until proven otherwise.. She’s a thief. She’s complicit. And how is she supposed to prove that she’s innocent. ?

Finally, stop Inboxing me to release the girl. Do I look like the police ? Who takes 300k from a random stranger? If my mum had slumped last night, all I would’ve gotten is rest in peace. I’ll block anyone who mildly suggests the girl is innocent. Not unless you’re privy to the complete details of the case, your opinion is not needed. 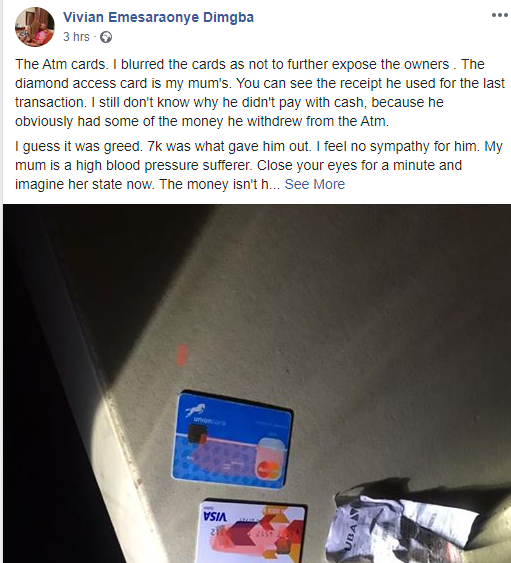 Lady accepts boyfriend’s proposal, then turns him down immediately and throws the ring away (Video)

Most Prostitutes In Germany Are From Nigeria Or Eastern Europe – Reports