2 COVID-19 patients on the run in Borno state

Two patients who tested positive for COVID-19, are on the run in Borno state.

Abbas Kaka Hassan, a 24 year-old male, and Hauwa Mohammed, a 42 year-old female, are on the run after testing positive to COVID-19 at the University of Maiduguri Teaching Hospital in Borno State.

The male is from Layin Tanki in Gwange 11 while the woman lives in Shuwari ward. 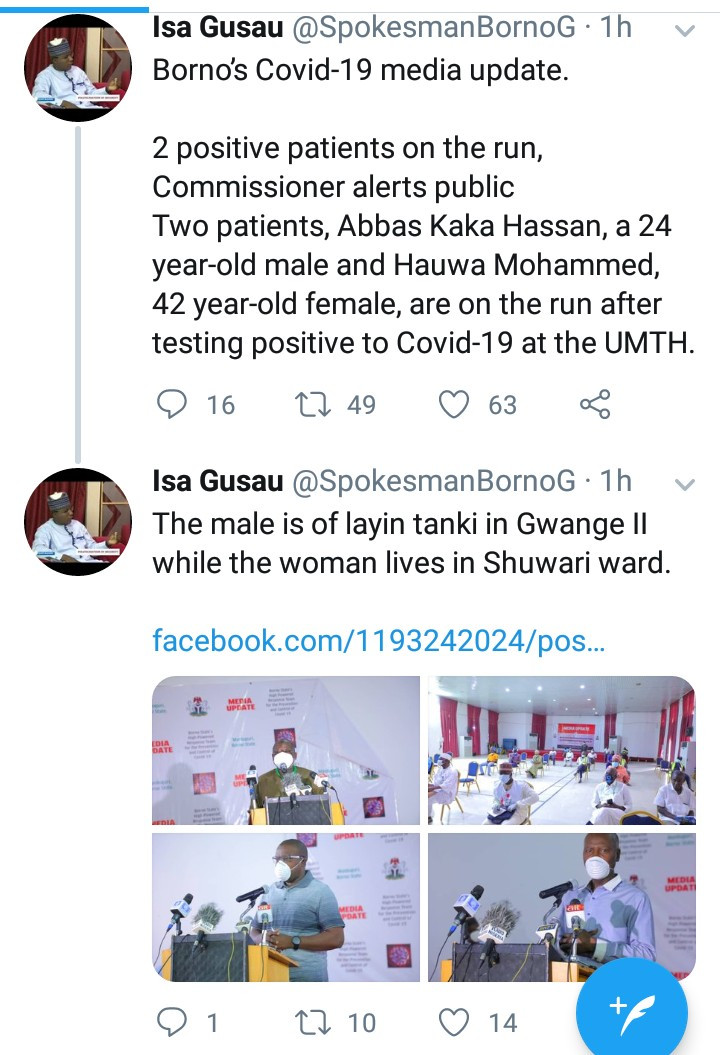 Borno Commissioner of Health and Secretary to the state’s high powered response team for the prevention and control of COVID-19, Dr Salisu Kwayabura announced this at the team’s daily media briefings which held on Sunday at the government house in Maiduguri.

He initially gave the male’s name while briefing journalists. After the briefing, he received additional information of a woman also on the run.

The commissioner said the male patient (Abbas), who was in initial telephone contact with the response team after his sample was collected, eventually switched off his phone when he learnt he tested positive. He also said a phone number through which the patient’s mother was in touch with the team, has also been switched off.

“When samples of patients with contacts to index cases are collected, they are normally advised to go on self-isolation. They give their contacts so they can be reached when results are out. This is the standard medical procedure. You cant detain someone with suspected contact. We do not have the lawful powers to do that. Other patients were also allowed to leave but they came into isolation centres and we have 19 of them in two isolation centres. However, the young man in question,  chose to go into hiding”.

He noted that a diligent surveillance and investigation team is working very hard to track the patient.

Dr Kwayabura called on anyone who tests positive for Coronavirus not to regard it as a death sentence as majority of those who test positive have recovered from the disease.

Author Beta Gist Naija StaffPosted on September 17, 2019
No fewer than three people lost their lives on Sunday night in Ede, Osun State, as a vehicle, conveying food items plunged into a...
Read More

Author betalensPosted on July 26, 2019July 26, 2019
American rapper, Cardi B has responded after a mother went viral for complaining about her son’s looks and calling him “ugly”. The mother said her biggest...
Read More

Author betalensPosted on June 9, 2019
It was a gloomy day last Saturday, as friends and family of 31-year old Deborah Ukamaka Johnson (Nee Odoemelam) paid their last respect at...
Read More