The Federal Road Safety Corps (FRSC) authorities have announced that a query has been issued to its officals who almost assaulted a lady for speeding off with a policeman on her car’s bonnet in Abuja.

LIB reported earlier that Media personality Khalid Oshoke who shared the video, said the lady refused to wind down her window or park for the security operatives because they weren’t wearing facemasks.

In a statement released by the agency’s Public Education Officer Bisi Kazeem, it was gathered that the Corps Marshal, Dr Boboye Oyeyemi has ordered the immediate withdrawal of the entire FRSC Team involved in the unprofessional and uncivil act.

After a careful study and analysis of the video and what transpired in it, the Corps wishes to inform the public that the following proactive measures have been taken; The Corps Marshal, Dr Boboye Oyeyemi has ordered the immediate withdrawal of the entire FRSC Team involved in the unprofessional and uncivil act.

The action of the Officers involved in that episode is completely contrary to the Core Values and Operational Ethics of the Corps and the Corps frowns at it .

The Corps Marshal has directed that the entire team be queried and sanctioned in accordance with FRSC relevant regulations on discipline. 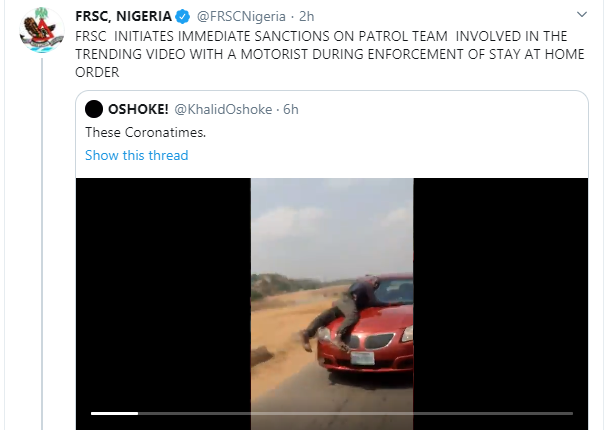 “The first time she moaned during sex, I took her to my pastor; it’s ungodly” – Newly married man

Author KelechiPosted on February 15, 2020
A newly married man has advised fellow men to take their partners to their pastors for deliverance if they moan during sexual intercourse. According...
Read More

Author betalensPosted on January 5, 2020
Hours after Iranian leadership threatened to retaliate in a harsh way to revenge the killing of Iranian top military officer who was killed by...
Read More

Two injured as car rams into FRSC office in Onitsha

Author KelechiPosted on March 2, 2020
No fewer than two people have been badly injured as a result of a vehicle ramming into the bridge head office of the Federal...
Read More