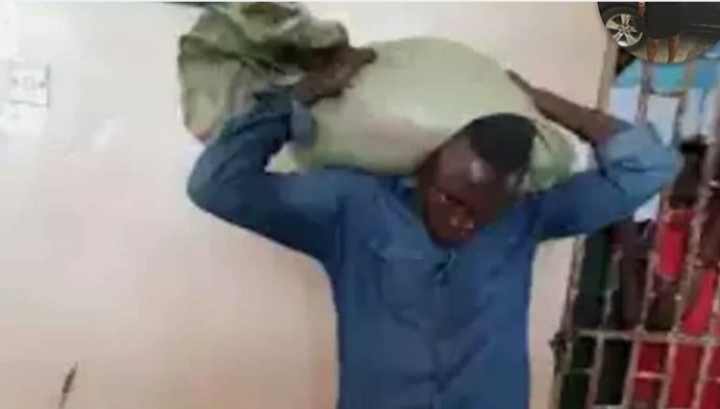 It was like a Nollywood movie in Delta community as a robber simply identified as Osagie on Monday reportedly surrendered himself to police divisional station located at Agbor.

The robber identified as Osagie stole a bag of beans from a shop around the market area in Agbor but went to the police station when the bag of beans he stole refused to be offloaded from his head.

While confessing to the crime, Osagie disclosed that he went out as early as 2am on Monday 27th April to break the shop which was to enable him have something to eat with his family since he has not been able to go out and earn money since the lockdown began in Delta state.

According to report, the owner of the beans was later seen around the police premises singing “tease songs” and lamenting about reocurrence of theft in her shop.

She disclosed that this is not the first time this is happening as she has suffered countless losses arising from thief outbreaks.

However, the shop owner opened the bag of Beans in question and gave Osagie half of the bag plus other food ingredients after he listened to Osagie’s story.

She added that government locking down without palliative measure is act of wickedness and dehumanization.

Young native doctor blows hot as he's arrested for not wearing face mask; says he's not afraid of Coronavirus and can cure it (video)

Abba Kyari never drove a car till he died; he was misunderstood and mischievously misrepresented by some Nigerians – Kyari’s Daughter writes touching tribute

Author KelechiPosted on May 5, 2020
Abba Kyari never drove a car till he died; he was misunderstood and mischievously misrepresented by some Nigerians – Kyari’s Daughter writes touching tribute
Read More

Author betalensPosted on January 15, 2020
Ebuta Meta Chief Magistrate Court in Lagos has docked a 27-year-old man identified as Damilola Farojoye for allegedy hitting and killing a staff of...
Read More

Man Helps His Brother In Giving Birth To 3 Kids With His Wife, While He’s Away

Author Beta Gist Naija StaffPosted on May 8, 2019
A Nigerian man is currently the talk of the moment for overdoing a task. The man who spoke in Hausa language, testified how he...
Read More