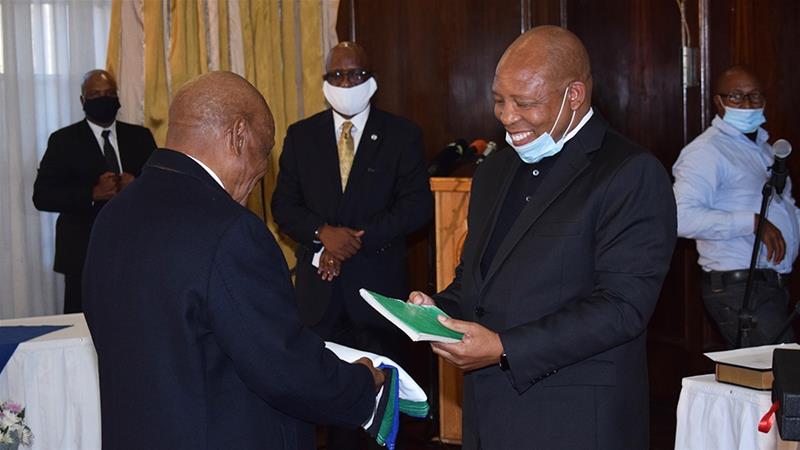 A new Prime Minister has been sworn into office in Lesotho after embattled Thomas Thabane formally resigned following months of pressure over his alleged involvement in the murder of his estranged wife.

Moeketsi Majoro, 58, the country’s Finance Minister took his oath of office at the palace of King Letsie III in the capital Maseru with his predecessor in attendance.  But Moeketsi did not give a speech.

Thabane officially offered his resignation on Tuesday morning, three months after police named him and his current wife Maesaiah as suspects in the murder of his former spouse, Lipolelo.

Lipolelo was shot by gunmen shortly before Thabane’s inauguration as Prime Minister and weeks before he remarried in 2017. The former couple were separated and had been pursuing a divorce before her death.

His current wife has been charged in the murder and has been granted bail.

Authorities made plans to charge the veteran politician with Thabane’s murder, but he asked the Constitutional Court to stop the courts from trying him for the crime while he remained in office.

His retirement means he could now stand trial.

Activist Harrison Gwamnishu relocates his parents from a mud house to a modern one; thanks them for their support while he was in prison for 4 years (Photos/Video)

Author KelechiPosted on November 11, 2020
Activist Harrison Gwamnishu relocates his parents from a mud house to a modern one; thanks them for their support while he was in prison...
Read More

Author Beta Gist Naija StaffPosted on August 27, 2019
The Presidency on Monday said the Indigenous People of Biafra, IPOB, has “nothing to do with President Muhammadu Buhari since he arrived Yokohama, Japan,...
Read More