The Nigeria Football Federation has placed the mothers of late ex-internationals, Sam Okwaraji and Rashidi Yekini on N30K monthly stipend.

The announcement was made on Thursday after the Federal Ministry of Youths and Sports Development had on Wednesday placed both matriarchs on N10K monthly stipend.

The NFF also disclosed that they will henceforth review the situation of surviving mothers of Nigeria’s ex-internationals that died in active service for the country and resolve what to do for them on a monthly basis.

“The NFF has decided to support this noble initiative with a further monthly stipend of N30,000 to each of the two matriarchs.”

“In addition, the NFF will henceforth review the situation of surviving mothers of our ex-internationals that died in active service for the country and resolve what to do for them on monthly basis.” 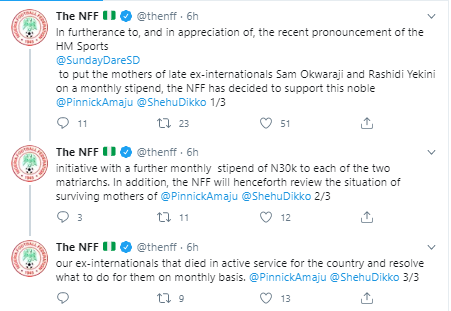 Rashidi Yekini died in May 2012 after retiring from football in 2006. His professional career, which spanned more than two decades, was mainly associated with Vitória de Setúbal in Portugal, but he also played in six other countries besides his own.

Yekini scored 37 goals as a Nigerian international, and represented the nation in five major tournaments, including two World Cups where he scored the country’s first-ever goal in the competition. He was also named the African Footballer of the Year in 1993.

Samuel Okwaraji, who played internationally for Nigeria, collapsed and died of congestive heart failure in the 77th minute of a World Cup qualification match against Angola at the Lagos National Stadium in Surulere, Lagos State on 12 August 1989.

Author Beta Gist Naija StaffPosted on November 12, 2019
Juventus superstar, Cristiano Ronaldo faces a two-year match ban for leaving the stadium before the end of the match against AC Milan on Sunday....
Read More

Author Beta Gist Naija StaffPosted on August 3, 2019
Arsenal have confirmed the sale of Krystian Bielik to Championship side, Derby County, for a fee of £10million ($12m). The 21-year-old defender, who joined...
Read More

Author Beta Gist Naija StaffPosted on May 14, 2019
Medikal has displayed his big swag in front of his newly acquired mansion situated at East Legon, one of the few habitat for rich...
Read More