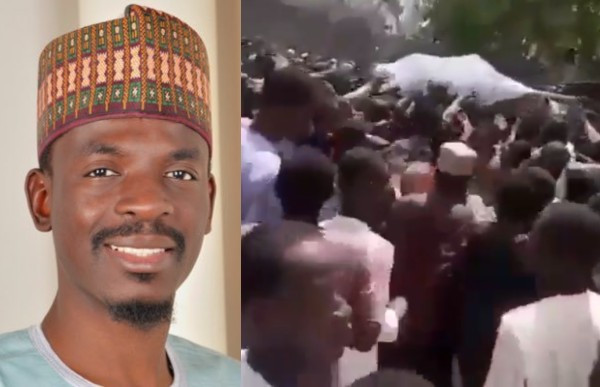 President Buhari’s media aide, Bashir Ahmad has countered a viral video in which some people were seen struggling to touch the corpse of an “unidentified person” at a burial ceremony.

Some social media users had alleged that the video was from the burial ceremony of the late Emir of Rano, who died yesterday after being hospitalized after an undisclosed ailment.

Bashir Ahmad who is an indigene of Kano State, countered the claim by stating that the late monarch of one of the newly created Emirates in the state was buried inside his Palace few hours after he died.

The Presidential aide further disclosed that a Rano Emirate official also told him that the burial ceremony was attended by less than 20 people.

The remains of late Emir of Rano buried inside his Palace approximately an hour ago, with less than 20 people attended the burial, but a fake video of thousands people has been trending throughout the day, purported to be his burial, it was not, Rano Emirate official told me.

Another heart warming music single "GIVE ME YOUR LOVE" Sunnymackson

Author Beta Gist Naija StaffPosted on August 17, 2019
A Civil Society Organisation (CSO), Independent Public Service Watch (IPSW), has called for the resignation of the Head of the Civil Service of the...
Read More

Blogger Okoro Blessing Arrested By Owner Of The House She Claimed

Author Beta Gist Naija StaffPosted on May 27, 2019
Blogger Okoro Blessing finally arrested by Onye Eze, the billionaire owner of the house she claimed to have built Watch Video Below: A post shared by Instablog9ja...
Read More

Author Beta Gist Naija StaffPosted on August 6, 2019
On the 2nd of August, 2019, a PDP youth leader, Abubakar Dadiyata who is a known social critic and influencer was abducted by men...
Read More