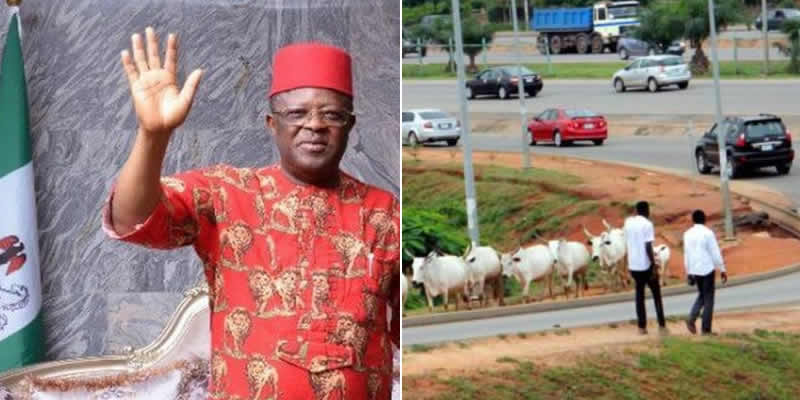 Gov. David Umahi of Ebonyi has banned movements of cattle in the state capital, Abakaliki and its environs with immediate effect.

Umahi made the announcement on Wednesday in Abakaliki during a statewide broadcast.

“I have told relevant security agencies in the state that I will no longer tolerate seeing cows within the centenary city and its environs such as the international market and new shopping mall among others.

“It is an insult for me to be struggling to enter the Government House with cows on the road,” he said.

The governor directed the state Attorney General to get a court order to auction cows seen within these vicinity.

Umahi also said that the state would not allow movement of Quranic pupils, Almajiri, to the state as the northern states governors had directed that such persons should be returned to their respective states.

“We will not allow Almajiris in Ebonyi and we have to tell ourselves the truth as a people,” he said.

The governor however, lamented that 90 per cent of the 13 confirmed COVID-19 cases were individuals who sold phone accessories in Lagos.

He noted that such individuals could still engage in such business in the state instead of doing so outside.

Umahi said that the victims were exposed to the deadly disease while engaging in such business in Lagos and advised youths to embark on such businesses in the state.

“We offered N250, 000 each to about 1, 000 youths in Lagos to establish businesses as such returnees should presently liaise with the commissioner for agriculture to get something they can do here.

“Most of the cases are from Izzi Local Government Area (LGA) as the Speaker of the state House Assembly, an indigence of the area, must watch the situation,” he said.

He described the 13 confirmed cases in the state as ‘shocking and surprising’ and advised the people to shun social media reports that the disease was not real.

“People are peddling false information on the social media that the disease is not real but people are using it to make money.

“People can actually use the situation to make money but it does not foreclose the fact that the disease is real.

“People must know that all the confirmed cases in Ebonyi showed no symptoms but were detected through massive testing of the people.

“Individuals can carry on with their businesses infecting others and because the symptoms do not show, they say there is no COVID-19 in their areas or the state,” he said.

Umahi commended President Muhammadu Buhari and state governors for the manner they had handled the pandemic, urging Nigerians to continue observing laid down precautionary measures.

“When the lockdown was on, cases were recorded in trickles but presently that it has been relaxed, cases are increasing in surprising manner.

“I expect another serious lockdown, if the cases continue to increase but it has to be with public consensus for us to defeat the monster,” he said.

How to Audition for Big Brother Naija Season 5 #BBNaija

Fayemi: 2020 wiII be tougher for rapists, child traffickers in Ekiti

Author Beta Gist Naija StaffPosted on December 21, 2019
The Ekiti State First Lady, Mrs Bisi Fayemi has promised that the government of Ekiti State is incurably committed to protecting the children against...
Read More

Robbers Savagely Matchetes A UNIPORT Student For Resisting Them During Attack

Author Beta Gist Naija StaffPosted on May 6, 2019
Robbers savagely machetes Uniport student for resisting them when they stormed his room, on Friday, in Aluu, Rivers State. According to a student of...
Read More

Adefisayo, Kyari, Lawson, Others to Speak at Edusko’s Business of Education Summit in Lagos

Author Beta Gist Naija StaffPosted on September 23, 2019
All is set for the third edition of the Business of Education summit. The annual summit, organised by Edusko Africa, is a gathering of over...
Read More

Author Beta Gist Naija StaffPosted on May 2, 2019
He was the star of Barcelona’s youth team side that conquered Europe last season with victory in the UEFA Youth League. Now Alejandro...
Read More