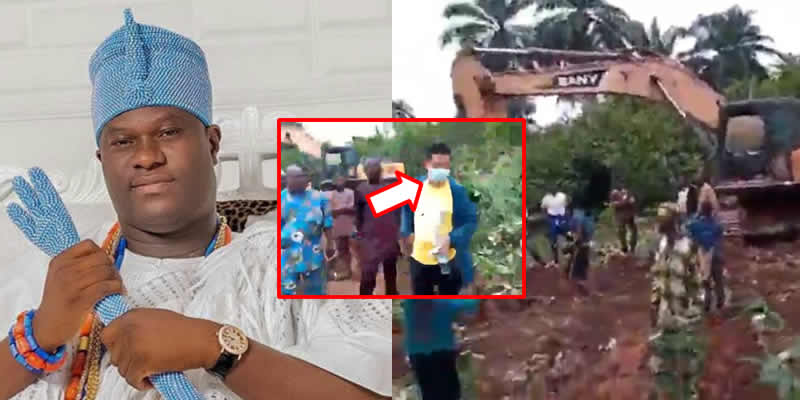 VIDEO: Ooni Of Ife Sold It To Us, Chinese Tells Osun Farmers After They Were Caught Excavating Acres Of Land

he Ooni of Ife, Oba Adeyeye Ogunwusi Ojaja II, has been accused of selling acres of land that belongs to some Nigerian farmers in Osun State to a group of Chinese Nationals for a huge sum of money.

According to the farmers who disclosed their displeasure during an interview, some Chinese men handed a huge amount of money to the traditional ruler and got express permission to take over the large farm lands without compensation to the owners.

One of the farmers that was interviewed in the presence the Chinese men on the expanse of land which was being evacuated identified himself as Olaiya, from Erin Nla, spoke in Yoruba language while reacting to the incident, he said;

“Please help me, this is my farm, the Chinese have destroyed everything planted on it, Cocoa plantation, Bananna plantation, every other assorted plantation that was planted on the farm, nothing is left for us again.

“These Chinese men claims they came with orders of possession from the palace of Oni of Ife after they have paid a huge sum of money.

“They did not inform anybody, they have destroyed our lives, this is the farming job we depend on.

While Olaiya was showing areas where the Chinese men have destroyed so far and the areas they plan to take over, he said “They brought excavator to remove everything from our land, we can not go and start stealing, this is the only occupation we have”.

“They earlier advised us to go back to farming and now they have started selling our lands to Foreigner.

Reacting to the claims by the farmers, Ooni of Ife debunked affiliation with the Chinese men in a Statement signed by his Director of Media, Comrade Moses Olafare. According to the Traditional Ruler, it is an attempt to embarrass Sacred Throne Of The Ooni.

While debunking the claims, he clarified that the disputed land is located at Aruwa village within Alaba-Ijesa community in Atakumosa West Local Government. It is an Ijesa land under the paramount rulership of Oba Adekunle Aromolaran, the Owa-Obokun of Ijesaland. The traditional ruler of the town ‘Oba Alaba of Aba-Ijesa who should have been earlier contacted before the stage managed video is still alive and should be the one to clarify on the matter.

I have no apologies for saying I used Chloroquine and ZIthromax to treat myself when I had Coronavirus- Bauchi state governor, Bala Mohammed

Author betalensPosted on July 23, 2019
DR Congo’s Health Minister, Oly Ilunga Kalenga has resigned after the responsibility for managing the country’s Ebola outbreak was taken away from him by President Felix Tshisekedi....
Read More

Gossip Lifestyle News
Author KelechiPosted on November 24, 2020
Some men of the Nigerian Army have been arrested after they were filmed assaulting a young man in Asaba, Delta state. WITHIN NIGERIA reports...
Read More