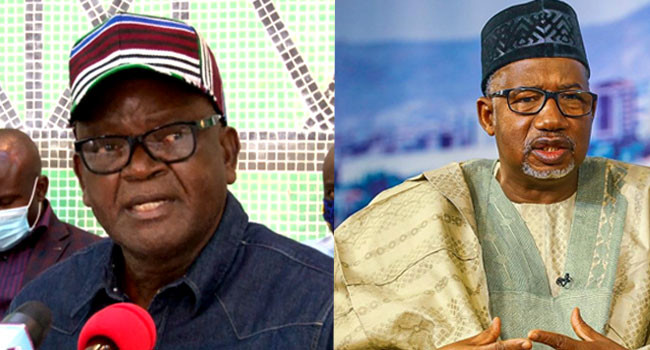 If anything happens to me, Gov Bala Mohammed should be held responsible – Gov Ortom alleges threat to life (video)

Benue State Governor, Samuel Ortom has alleged a threat to his life and has said that his Bauchi State counterpart, Bala Mohammed, should be held responsible if anything happens to him.

Governor Ortom made the accusation while briefing journalists in Makurdi, Benue State capital, on Monday, February 22. His accusation comes barely a week after Governor Mohammed accused him of being behind the hatred against Fulanis in Nigeria. Governor Mohammed also threw his weight behind herdsmen who go around carrying AK47 rifles.

“I want to think that, with what he said and what those herdsmen wrote to me and said that they were going to assassinate me, Bala Mohammed is also part of it, with what he has said.

And if anything happens to me, I don’t want anybody to be in doubt, Bala Mohammed should be held responsible. Especially his last week outing after the condemnable remarks he made about Fulani carrying AK-47 and living anywhere in Nigeria.

He came back to say Ortom is responsible for the hatred against Fulani men and I regard this as a way of vilifying me and profiling me towards assassination. He wants to instigate the Fulani people against me. I am not against Fulani people, they are in Benue State and they remain here,” Ortom said.

“I think the governor of Bauchi State, my brother, Governor Bala Mohammed should just come out and apologise to Nigerians,” Governor Ortom said

Author Beta Gist Naija StaffPosted on November 17, 2019
The Director-General of the National Youth Service Corps (NYSC), Brig.-Gen. Shuaibu Ibrahim, has commended the Federal Government over its ongoing closure of the country’s...
Read More

COVID-19 Lockdown: Woman kneels down begging police officers not to confiscate motorcycle of a rider carrying her and sick child to hospital (photos)

Author Beta lensPosted on April 15, 2020
COVID-19 Lockdown: Woman kneels down begging police officers not to confiscate motorcycle of a rider carrying her and sick child to hospital (photos)
Read More

Author Beta Gist Naija StaffPosted on April 30, 2019
A lady who’s expecting something worth her love from her man on her birthday, was so much disappointed after the boyfriend presented a cake...
Read More