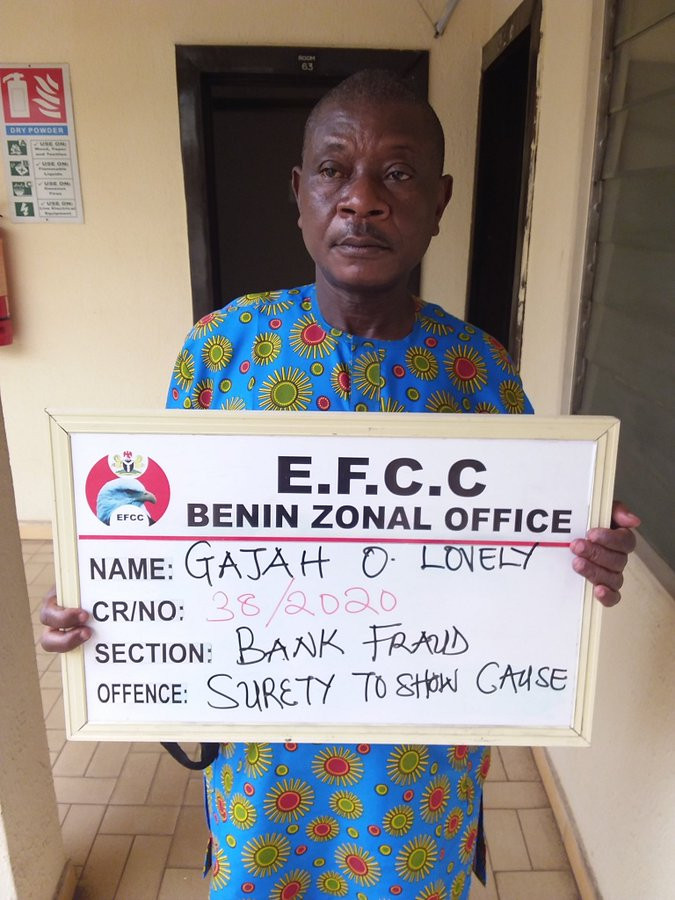 A man has been sent to prison over failure to produce the suspect he stood for as surety.

According to the Economic and Financial Crimes Commission, EFCC, Mr.Lovely was arraigned on a two count charge of conspiracy to pervert justice and failure to produce a suspect (Richman Pere) for whom he stood as surety.

One of the counts reads: “that you Gajah Omayulele Lovely on or about the 9th January 2021 whilst standing as surety to a suspect, one Richman Pere (at large) aided and abated his escape by refusing to produce him for arraignment before the Federal High Court, Benin..and failing to cooperate with the Economic and Financial Crimes Commission in bringing him to custody and thereby committed an offence”.

The defendant pleaded ‘not guilty’ to the charge, prompting the prosecution counsel, Ibrahim Mohammed to ask the court for a trial date and to remand the defendant in prison custody.

Justice Imadegbelo ordered that the defendant be remanded at the Correctional Centre and adjourned till March 17 for trial.

Davido visits his old apartment in the US (photo)

Author Beta lensPosted on October 20, 2020
‘Prevail on your children/wards to desist from acts of violence under any guise whatsoever”- Police tells parents
Read More

Author betalensPosted on July 23, 2019
An antiretroviral drug dolutegravir, commonly known as DTG, has been certified safe for use by pregnant women and those in their reproductive years by the World Health...
Read More
Gossip News
Author Beta Gist Naija StaffPosted on May 31, 2019
Ay and Chioma showing off their comic dance moves in Dubai. Nigerian Comedian Ayo Makun,a.k.a AY and nollywood actress Chioma akpotha steps shows us...
Read More