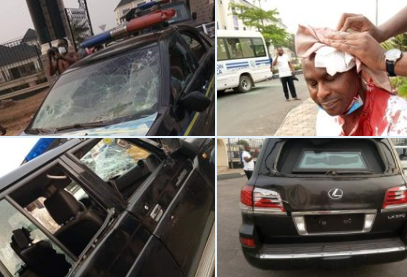 Last Friday, the state Commissioner for Lands, Enyinnaya Onuegbu, led some members of the state task force to confiscate the property said to belong to Nkechi, Okorocha’s wife’s.

This evening, the former governor led some of his staunch supporters to forcefully repossess the hotel. This was resisted by the supporters of the incumbent governor. A fight broke out leading to some of them sustaining varying degrees of injury. Vehicles were also destroyed during the clash.

Okorocha has since been arrested for breach of public peace.

Author Beta Gist Naija StaffPosted on May 24, 2019
The Police in Anambra State has confirmed the death of five persons in a three storey building that collapsed on Wednesday in Onitsha, the...
Read More

Author Beta Gist Naija StaffPosted on August 25, 2019
President Muhammadu Buhari has revealed that slavery still exists. He said this in an opinion published in the Washington Post newspaper at the weekend...
Read More

Author Beta Gist Naija StaffPosted on November 9, 2019
This young woman knows her selling point and she is flaunting it like it’s about to be taken away from her.
Read More