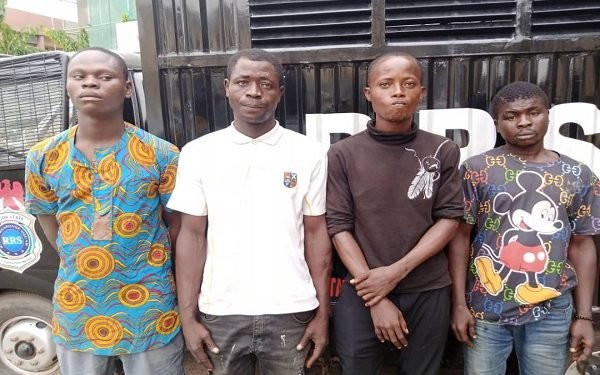 Four suspected traffic robbers alleged to have attempted to rob some operatives of the Rapid Response Team (RRS) have been arrested by the police in Lagos.

The suspects identified as Adewale Ismaila, 30; Chinadu Okafor 26; Tote Victor 19 and Abdulahi Olalere a.k.a ‘Orobo’ 20, were arrested around Abiola Garden, Ojota, by an undercover police team they wanted to rob on Thursday, March 25.

A statement by Muyiwa Adejobi, spokesperson of the police command, says the surveillance policemen were deployed in different parts of the state following complaints by motorists about incessant traffic robbery attacks.

“The surveillance team was on a decoy at about 6:30am beside ‘Abiola Garden’ when the suspected criminals came out with dangerous weapons in an attempt to rob the policemen, demanding for their wallets and other valuables before they were all apprehended.

“One of the suspected notorious traffic robbers, Abdulahi Olalere a.k.a ‘Orobo’, confessed to belonging to a robbery gang which specialises in attacking and robbing innocent motorists of their belongings in the early hours along Ikorodu Road. He also confirmed that his gang was responsible for the early morning robbery attacks on innocent motorists around China Town and tipper garage by Ketu area of Ikorodu Road on Tuesday, March 23.

Preliminary investigation revealed that Abdulahi Olalere a.k.a ‘Orobo’ was recently released from a Correctional Center having served six months jail term for same robbery incidents in 2020.

The Commissioner of Police, while directing that the suspects be transferred to the State Criminal Investigation Department, Panti, Yaba for investigation, however promised to channel both material and human resources of the command to tackling traffic challenges including traffic robbery and other forms of criminality in Lagos State,” he said

Man hacks his girlfriend to death after she ended their relationship, commits suicide by jumping in front of speeding trailer

Author Beta Gist Naija StaffPosted on January 6, 2020
Gov. Nasir El-Rufai of Kaduna State has ordered the closure of all gas refill stations located within residential areas in the state. The governor,...
Read More

Author Beta Gist Naija StaffPosted on September 22, 2019
The management of Maritime Academy of Nigeria (MAN), Oron, in Akwa-Ibom, on Sunday cautioned newsmen against the spread of fake news, urging them to...
Read More

Man Leaves The Theater Room, Runs After His Wife After His Phone Was Given To Her

Author Beta Gist Naija StaffPosted on June 26, 2019
A Man was seen leaving the theater room as he ran after his wife after he found out the nurse has given her his...
Read More